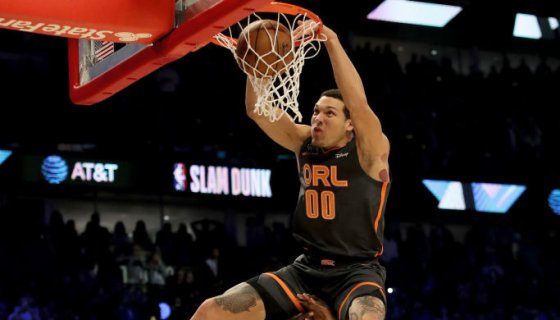 To be clear, both of these guys got busy with the dunks, pulling off nothing but 50’s all night, for the most part. But Gordon’s one hand 36 windmill off the backboard was insane. And then the man jumped over a 7′ 4″ Tacko Fall.

Aaron Gordon has the most perfect scores (8 of them!) in the history of the Dunk Contest – yet zero trophies.

He started off last night with five straight 50’s – and dunked over a 7’5” human being holding a basketball in his final dunk… and still lost pic.twitter.com/VHWCnDTUFD

Nevertheless, Derrick Jones, Jr. got the chip, and Twitter immediately started pointing to the jig. In fact, Dwyane Wade immediately got spotlighted as a culprit.

It was at this moment, @common and Scottie Pippen knew, Dwyane Wade fucked up. #nbadunkcontest2020 #AaronGordon pic.twitter.com/vloB3o94NT

This video says it all. Look at DJJ’s reaction. He was shocked too. The NBA players reactions. The way Common looked at @DwyaneWade with a ‘WTF did you do look’. Aaron Gordon robbed!! #NBAAllStar  #DunkContest pic.twitter.com/zca7vjWT91

“I feel like I should have two trophies.” – Aaron Gordon

Check out every dunk from @Double0AG in the 2020 NBA Dunk Contest.

Peep more reactions to the jig below.

We plan on reaching out to Chicago Police today to investigate @OrlandoMagic forward @Double0AG being robbed of a dunk contest championship last night.

“We’re here to do four dunks. It should be the best out of four dunks. I did five straight 50s. It’s over. It’s a wrap. Let’s go home. Who’s running the show?” – Aaron Gordon

They need to give Aaron Gordon a dunk contest lifetime achievement award. He needs some hardware to show for producing some of the greatest dunks we’ve ever seen pic.twitter.com/D32cFq0mgp

Remember when Aaron Gordon lost the dunk contest with a average dunk score of 49.5?

Do you think Aaron Gordon was robbed of the dunk title last night?

Jones told SportsCenter if Aaron Gordon thinks he should have won, he’s welcome to come back for a rematch next year.

Aaron Gordon practicing his dunks is almost as good as the real thing 🍿 pic.twitter.com/LOWVYAYVFO

“Derrick Ima let you finish but, Aaron Gordon has one of the best performances of all time!” #robbery#SlamDunkContest pic.twitter.com/2NI6uvyUl3

Frame-by-frame is the only way to understand how great @Double0AG’s dunk over @tackofall99 was. To, with no test run, clear a upright 7-foot-6 man with that short of a head start is virtually impossible. pic.twitter.com/00RS1BKL2M