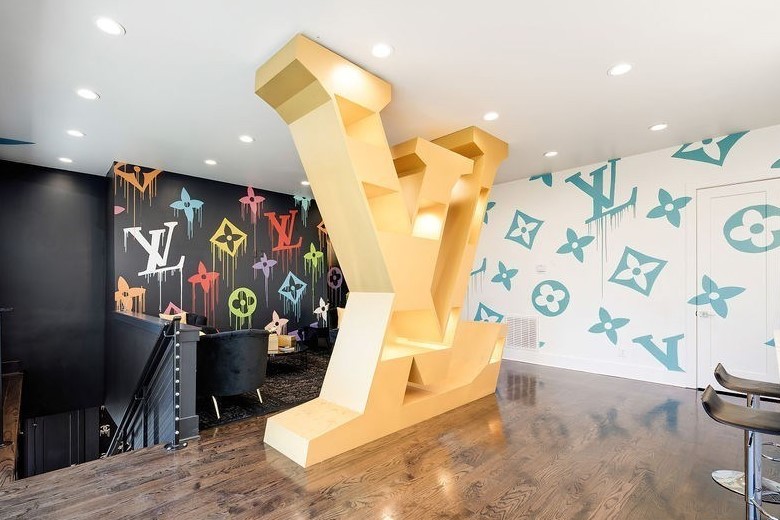 The year of our lord 2020 has been, to put it mildly, a cruel, unrelenting joke of a year, so it’s with deep regret we’re here to make it just that little bit worse. Landing in our inbox this morning came news of a unique rental opportunity in Nashville, Tennessee, and reader: what has been seen cannot be unseen. Located slightly off a dismally grey stretch of freeway at number 21B Fern Avenue lies a cubist nightmare in which fashion iconography and fuckboy-worthy artistic flourishes clash in a truly horrific melee that someone, somewhere, is trying to pass off as desirable interior design.

As seen in a short video on the $1.1m property’s listing page, after a short 360 of its exterior – which basically looks like a bunch of shipping containers piled one on top of the other – the fun really begins. Stepping across the threshold, viewers are transported to a dark hallway where Chanel’s iconic double-C logo drips down the walls in such a way Coco herself could have only dreamed of it being bastardised. Underneath the stairs, a bunch of ‘vintage’ television sets are stacked up – you know, just in case you fancy recreating Poltergeist in the dead of night, because why not?

Next up is a glimpse of a hostel-esque dorm bedroom, where two bunk beds made up with knock-off Supreme bed linen stand against walls emblazoned with the cult brand’s box logo, as flanked by what could be the most uncomfortable looking rigid plastic lip sofas known to man. The Supreme theme mercilessly continues in the en suite, which is resplendent with a shower curtain we’d happily stand behind and await – nay hope for – a brutal Psycho-esque end knowing what was waiting for us next door.

Onwards, and up the stairs, lies the first of a succession of Louis Vuitton rooms, where the revered French brand’s LV logos dribble down the walls in such a way that you might begin to feel as if you’re on a nightmarish acid trip and the walls are melting, but as we can confirm, having watched the entirety of the video, that scenario would surely be preferable to what’s yet to come. It’s a design detail that continues through the rest of the house, with Versace’s medusa, Gucci’s double-Gs, and Saint Laurent’s YSL emblem all afforded the same rudimentary spray-paint treatment.

Rounding things off are three further… shall we stay standout features of note that are fully deserving of a mention. The first, a floor-to-ceiling ‘LV’ sculpture, separates a lounge area from the adjacent kitchen, which is apt because, at this point, I’d like to separate my optic nerves from my eyeballs. The second, a similarly enormous neon painting of Kylie Jenner’s face, is emblazoned on one of the master bedroom walls, because who doesn’t want to be confronted with that as they stir from their slumber? The pièce de résistance, at least IMHO, is a vast breakfast bar – boldly emblazoned with the incorrect phonetic pronunciation of Louis Vuitton and seemingly dredged up from the very depths of Facebook Marketplace.

Striking a balance between a Changing Rooms episode in which a bubbly homeowner from the regions tells interior maestro Laurence Llewelyn-Bowen she has ‘a passion for fashion’ and late capitalist fever dream, the house is surely just waiting to be filled with an all-singing, all-dancing cast of TikTok influencers and turned into the backdrop for some scalding hot content in the new year – and I for one cannot wait to see it.

See for yourself in the gallery above.