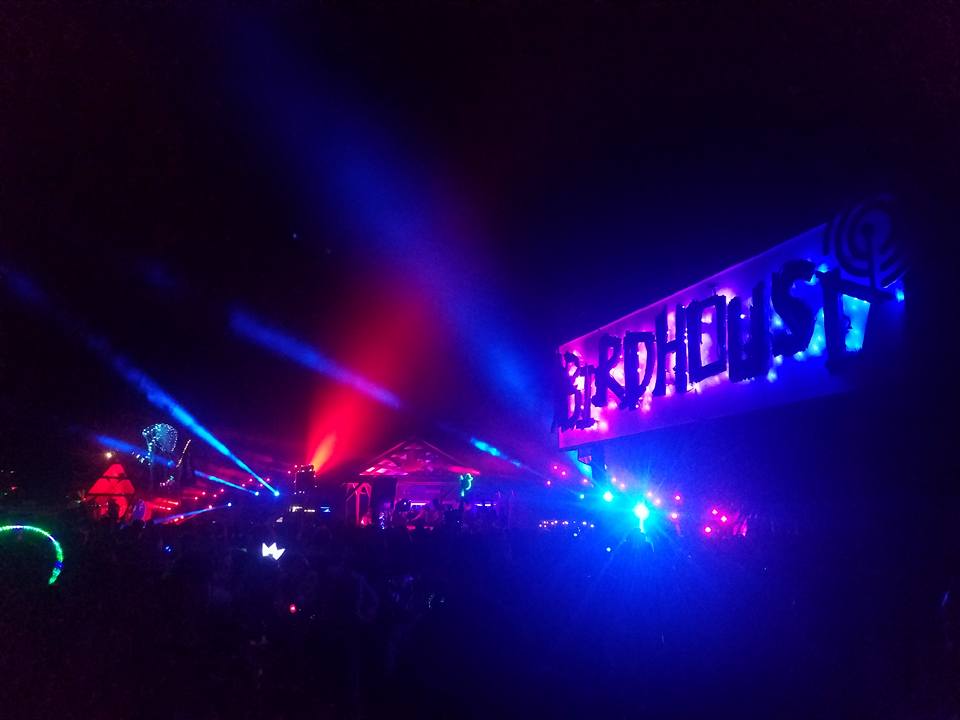 As I pack up the car at 8 A.M. on Monday morning, my mind is still racing. It seems like no time has passed since arriving at 3:00 P.M. on Thursday afternoon. Although the weekend was full unexpected turns and is now coming to an end, my mind is full satisfaction, anticipation and inspiration. Dirtybird Campout East Coast‘s first ficial festival will be four incredible days that live on in me forever. Even with all the hiccups and hold ups, between new friends made, the incredible music, and the positive attitude all the Dirtybird counselors and campers, there is nothing like it in the world. 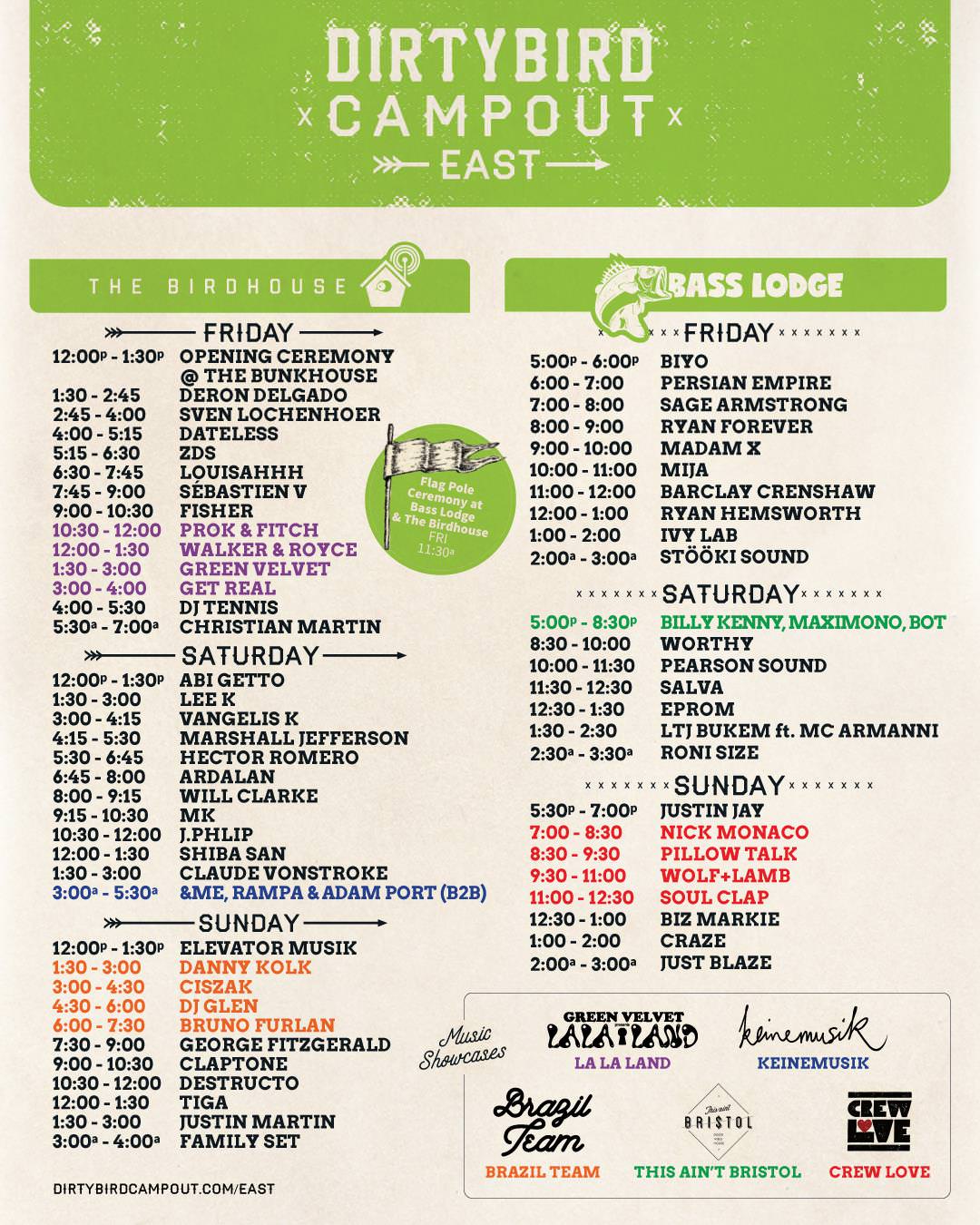 The weekend was set up to be an incredible tour de force funky techno, house and tech house beats. Superstars and label bosses Claude VonStroke, Green Velvet and Billy Kenny each had a healthy crew scheduled to perform, showcasing the incredible talent included in the Dirtybird, Relief, and This Ain’t Bristol teams. Other Campout favorites like Tiga and Mija appeared on the lineup as well. Biz Markie and Claude’s alter ego Barclay Crenshaw insured a healthy dose hip-hop beats to round out a solid lineup. I headed over to the Bass Lodge stage at 8 P.M. on Thursday to start the weekend f right with a 2 hour VonStroke set followed by Seth Troxler until 2 A.M. 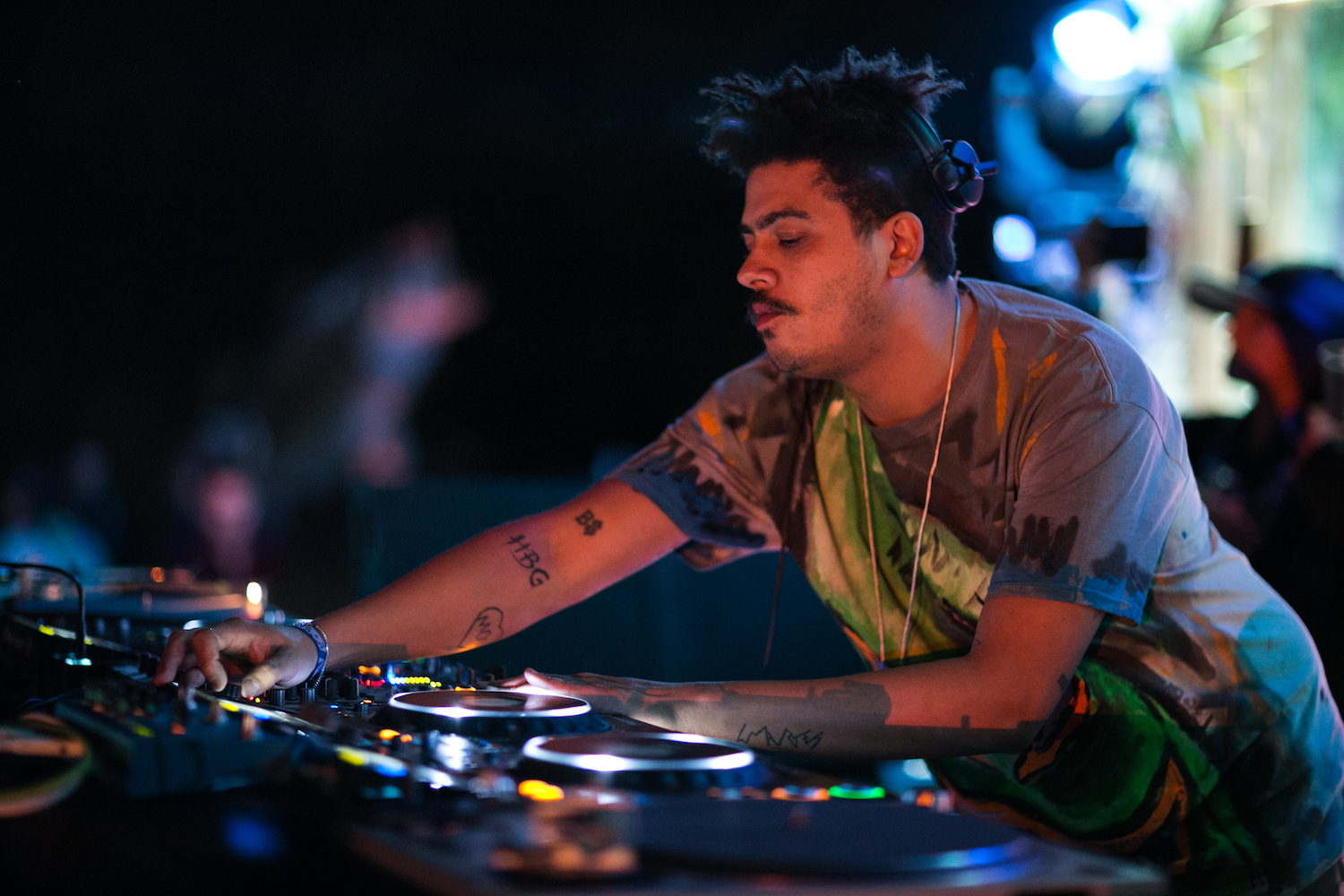 To say the early bird party was impressive would be a disservice. The Dirtybird Godfather played the most incredible solo set I have seen him play yet and watching him play for his dirty little birdies is an experience in and itself. As he layed down the inaugural set the first East Coast Campout you could see the pride and excitement in his eyes and his stature. But the highlight the night was Seth Troxler. As he shimmied back and forth with his shoulders for four hours, his active manner drew me into one the best sets the weekend. Unfortunately the wind was about to change directions on the Dirtybird family that had gathered for the weekend.

Although gates had opened up at 10 A.M. on Friday, they were quickly shut down around 11, leaving many festival attendees stranded near the campsite without cars or in nearby towns, awaiting word on the festival. The above tweet confirmed our fears as we realized no music was playing at the scheduled 1:30 start time. As attendees both inside and outside the gates panicked, the Dirtybird and Do Lab crew worked tirelessly throughout the night to bring back the music. Things started looking up when campers were finally allowed to enter the venue after several hours in limbo. Leslie Zigel, the Dirtybird lawyer released this statement concerning the effort to reacquire a permit for the festival.

After a day no music and a stressful morning anxious waiting, campers were delighted to see Claude VonStroke driving around in a golf cart screaming “The music is back!” Cheers filled the air. In the light that news the magic the weekend began to dawn on me. All the drama and circumstance was not enough to hold the Dirtybird fam back from having a good time even as the festival being shut down permanently loomed in the background. And even though the revised schedules had the main festival stages shutting down by 10 P.M. the excitement on everyone’s faces was clear. 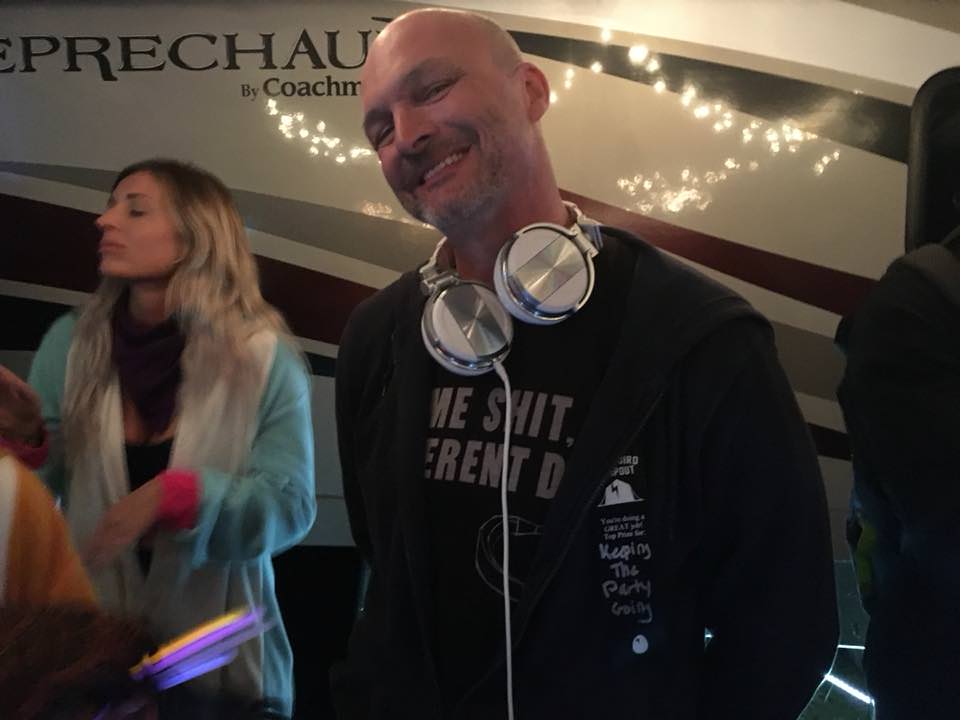 Friday truly showed me why these fans are the best in the world. Before Claude’s Saturday morning ride through the campgrounds, renegade sets and positive energy held everything together. As ficials worked to restore the festival permit during Friday afternoon, I ended up at a high energy party with Dateless behind the decks. Even though he was at a small sound camp, the LA based Dirtybird Player delivered an intense afternoon set worth the main stage. After the sun went down I found myself just down the road in a square renegade stage formed by 4 RVs and affectionately dubbed “The Rage Cage.” I danced my heart out to DJ Dack, whose track selection was on point the entire weekend. After a few hours I continued my journey to find what looked like a biplane that had crash landed on a truck. Perhaps the coolest campground stage the festival, the plane stage hosted a plethora ficial artists from Ardalan and Worthy to Justin Martin and Justin Jay.

Saturday by contrast highlighted the reasons why the Dirtybird label and its producer and DJ lineup is the best in the world. After what they knew was a huge let down to fans, Claude and the crew brought out all the stops on Saturday. Fan favorite Christian Martin opened up the ficial festival sets to a crowd elated Dirtybirds, finally able to experience the music how it was supposed to happen. The Bot B2B Maximono B2B Billy Kenny takeover delivered high quality, weird as hell, good vibes house after Mija B2B Ryan Forever got really ‘Nasty‘. Fisher, Will Clarke, and ZDS held down the main stage during the day. But by far the most impressive set the night was Claude VonStroke B2B Walker and Royce. They led their set f with a new remix ‘Take Me To Your Leader‘ and never dropped the energy throughout. I can say without any hesitation that this was one the best sets I’ve ever seen. To top the set f a mysterious dancer took to the rafters the stage, dancing across the front the crowd, hanging upside down from support beams, and pulling out some the craziest moves I have ever seen. If the Dirtybirds were looking for a way try and make up ground for losing one day a festival this set went a long way towards it. 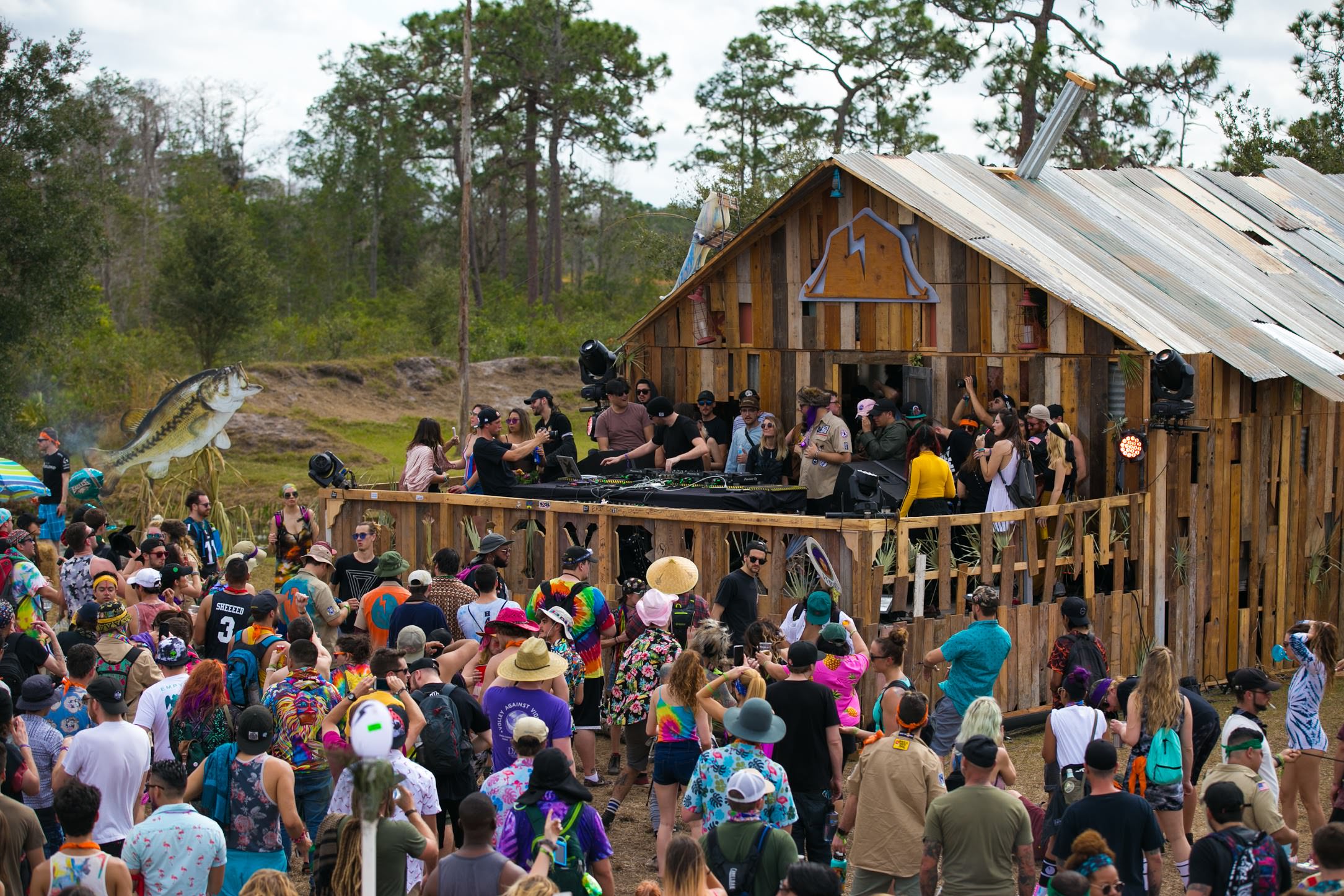 Finally, Sunday had arrived and reminded me why I believe this is the best music around. Beginning at 7 AM the atmosphere Dirtybird Campout East was infectious. There was something spiritual in the air on February 4th. We had been waiting all weekend for continuous music for more hours than you can count and it was finally here. The Brazil team including Danny Kolk and Bruno Furlan kept spirits up during the morning hours while Claptone delivered a great set after Shiba San destroyed the decks for an hour and a half. Although some evening rain damped the campers a bit, spirits could not have been higher. Claude hopped on the decks for an impromptu half hour set at 8:30 just to drop a cathartic ‘Rain Break‘ to tie the entire weekend together. Finally at 9 the Family Set began, bringing the ficial festival to a close with some the best vibes I have ever experienced.

So as I slowly packed up my canopy tent and air mattress, I stopped for a few minutes just to walk back into the festival grounds. As I stood in the now empty field in front The Birdhouse I let out a long sigh. Not a sigh disappointment but a sigh satisfaction. Not a sigh exhaustion but a sigh being overwhelmed by inspiration. Not a sigh defeat but a sigh anticipation. Even with all that negativity at the beginning the weekend this festival reminded me why I fell in love with the Dirtybird label, its fans, and the music. Regardless the obstacles that stood in our way, the family that was created at East Coast Campout withstood it all. The artists pulled out all the stops on their ficial and renegade sets and the fans showed their true devotion by toughing out Friday to make Saturday and Sunday two the most magical days my life.

As I sat at my desk preparing this article and contemplating whether or not East Coast Campout would happen next year, I was reassured even further. In an email to all ticket holders, Dirtybird not only explained the circumstances for Friday’s shutdown, but also promised a second year Dirtybird Campout East Coast and a discount for this year’s attendees. Although Do Lab and Dirtybird were not at fault for the venue misrepresenting the permits it had attained, they are doing what is right by their fans and community. Thank you to Claude VonStroke, the Dirtybird team, and the Do Lab team for showing us all what it means to truly love your family and fans. I’ll definitely be back next year! 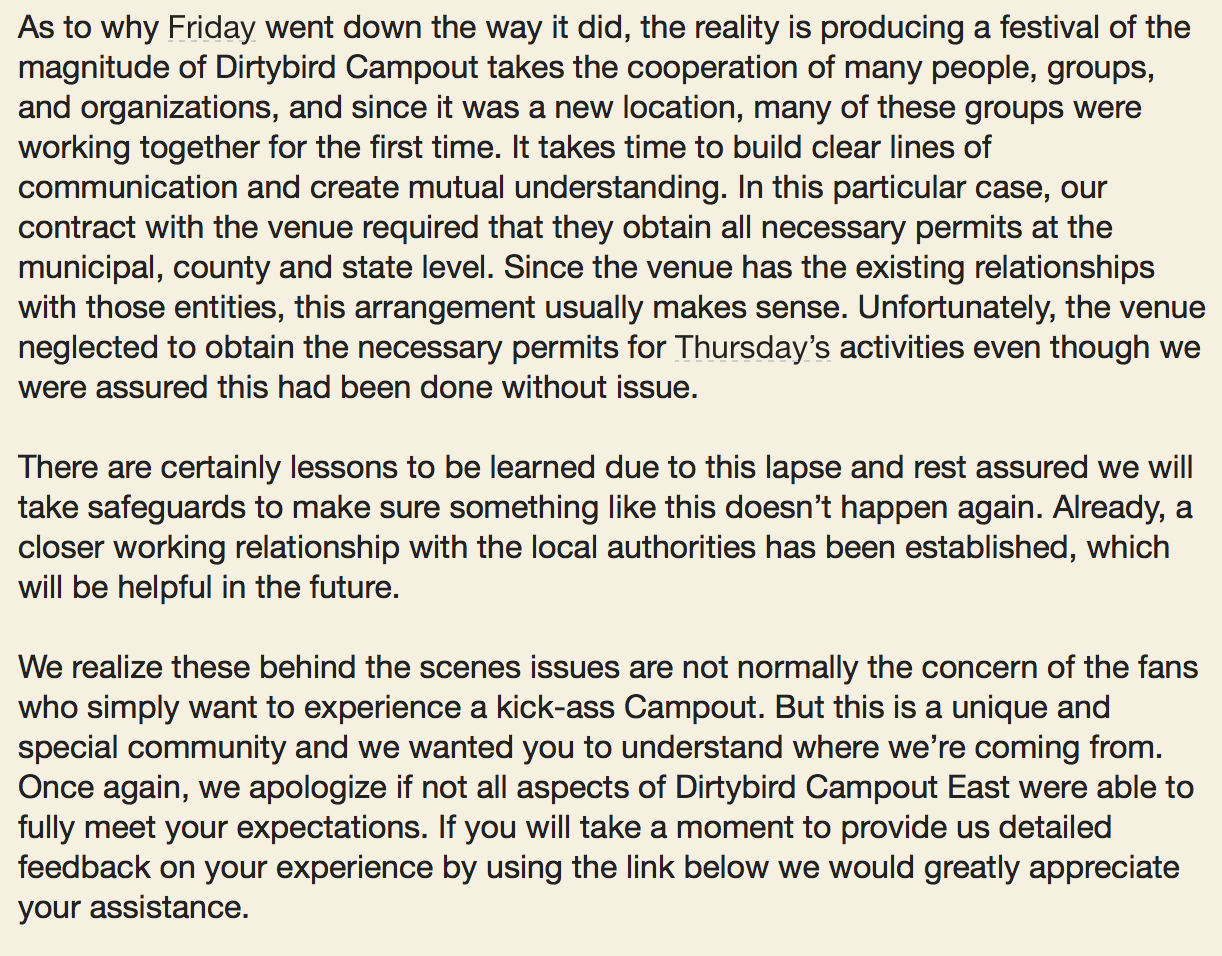