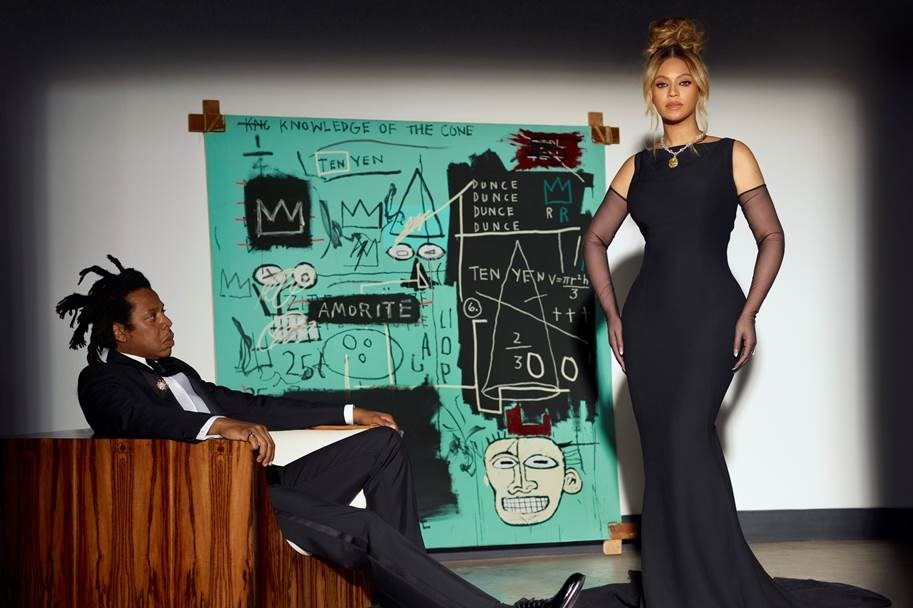 It was just a few weeks ago that a notoriously tight-lipped Beyoncé spoke of all the upcoming projects that she had been crafting over lockdown – including a range of bath bombs, a hemp farm, and an album. As she stood in the pages of Harper’s Bazaar, eagle-eyed observers were quick to note that the Houston native had also swapped out her beloved Lorraine Schwartz jewels for Tiffany, marking the official announcement that Bey, and Jay Z, would become ambassadors for the LVMH-owned label.

Today, the duo’s first campaign for the jeweler has been released, featuring a never-before-seen Basquiat painting. Dating from 1982, Equals Pi had been in the possession of a private collector, until Tiffany – lured in by the piece’s robin egg blue paintwork – acquired the work. “We don’t have any literature that says he made the painting for Tiffany,” Alexandre Arnault, VP of Tiffany said. “We know he loved New York, and that he loved luxury and he loved jewelry. My guess is that the painting is not by chance. The colour is so specific that it has to be some kind of homage.”

The campaign imagery, shot by Mason Poole, captures this tussle for attention between Basquiat, Beyoncé, and the pendulous 128.54 carat gem which hangs from her neck. Unearthed in South Africa in 1877, the Tiffany Diamond has only ever been worn by Lady Gaga and Audrey Hepburn in Breakfast at Tiffany’s. Fitting then, that the Carters are both dressed in Givenchy, with Beyoncé debuting her own version of Moon River, from the 1961 film.

Earlier this year, LVMH bought a 50 per cent stake in Jay Z’s Ace of Spades champagne, and today’s campaign marks a sea change in Tiffany’s creative direction – which will see the heritage label make increasing efforts to align itself closer to youth culture and the zeitgeist. As part of the partnership with Beyoncé, Tiffany is also donating $2 million for scholarship and internship programs for Historically Black Colleges and Universities.