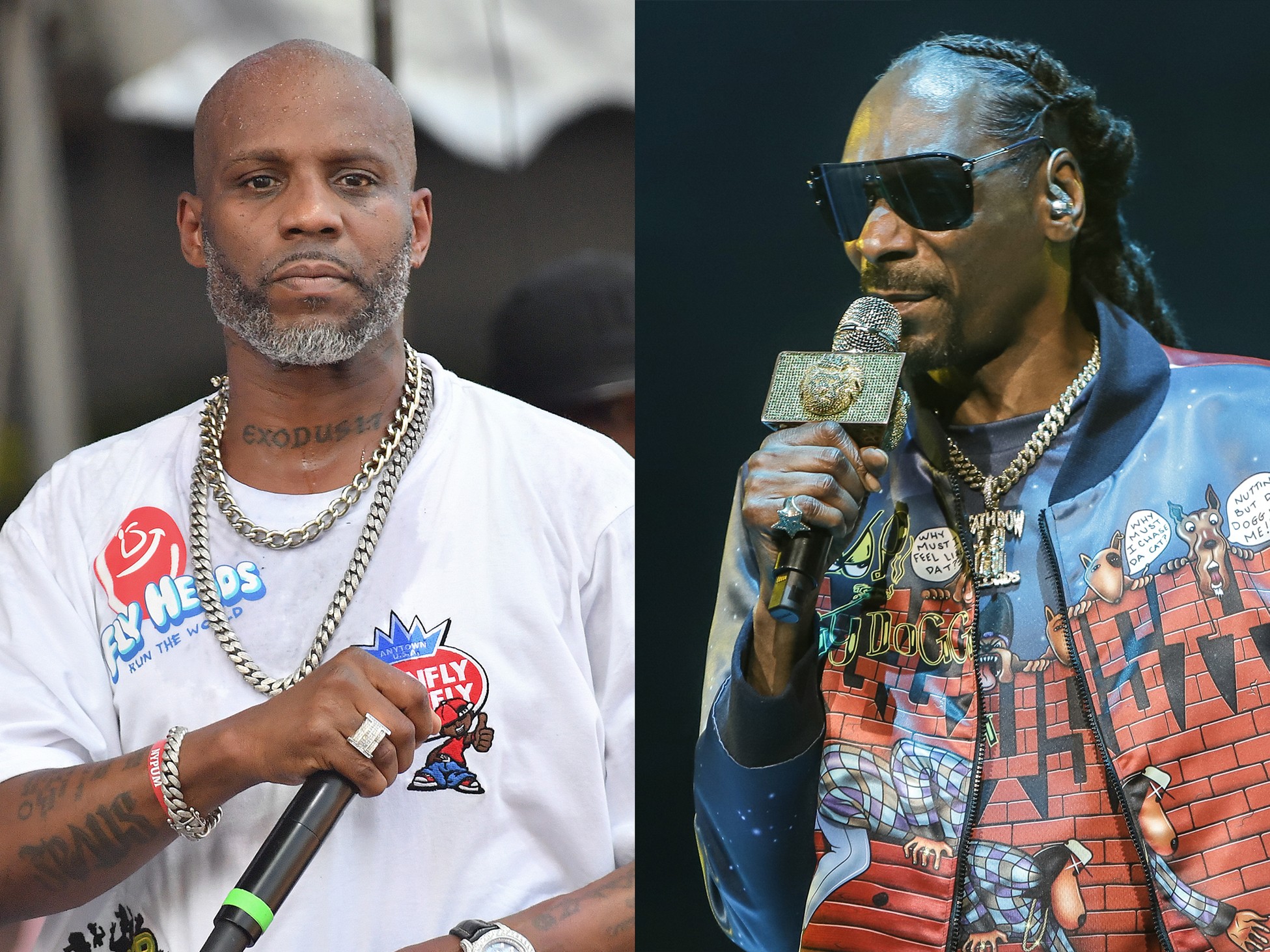 As Verzuz continues to evolve and progress as a platform and brand, the battles have only gotten better and more competitive, with Snoop Dogg and DMX‘s celebration being the latest pairing to captivate the culture. Both making their debut during the ‘90s, Snoop was the first to crashland on the scene. Parlaying standout guest appearances alongside Dr. Dre on “Deep Cover” and The Chronic into a deafening buzz surrounding his name and debut album, Doggystyle. From there, Snoop has built a legacy as one of the greatest rap artists of all-time, reinventing himself in effortless fashion while continuously dropping hits that touch various generations of music fans, of all genres. With seventeen solo studio albums, as well as multiple collaborative and group projects to his name, Snoop Dogg is revered as a cultural treasure and hip-hop’s resident Doggfather. As one of the more formidable lyricists in rap with an onslaught of show-stealing guest appearances, DMX took the world by storm upon the release of his debut album, It’s Dark and Hell Is Hot, which sold upwards of four million copies and singlehandedly shifted the landscape of rap music. The first artist to release two chart-topping solo studio albums in the same calendar year, the Yonkers, NY native broke multiple records and is equally revered for his passion and spirit as he is for his music.

Given both artist’s affinity for canines and their stature as legends from opposite coasts, it was only right that Snoop and DMX face-off in a Verzuz “battle” to determine who’s really the top dog in this thing of ours. As a mix of classic records were spun by DJ Battlecat, Snoop Dogg arrived on the set first, decked out in a Doggystyle t-shirt, with DPG sweatpants to match. Not long after, he was joined by DMX, who rocked a red and black velour suit; he looked invigorated and as primed for a comeback as ever. As Snoop grabbed a few chicken strips to help sop up his liquor, DMX sipped on his Kool-aid and shared Now & Laters with his opponent, proving that some dogs are able to play nice, even in the heat of battle. Streamed from Snoop Dogg’s home, this week’s Verzuz was as anticipated as any we can remember, as Snoop and DMX were both considered the biggest stars in rap at one point in time with catalogs that have given the culture countless hits and timeless records. The proceedings, which begin with a prayer by DMX, were set into motion, as Snoop Dogg took home-field advantage with the first salvo before positions reversed following the first ten rounds. Let the battle of the dogs begin.

For his first salvo, Snoop Dogg harkens back to where it all began: “Deep Cover,” his inaugural guest appearance alongside Dr. Dre, which put him on the trajectory of stardom in 1992. DMX comes a bit from left field, launching into an acapella performance that provides the buildup for the intro to his blockbuster 1998 debut, It’s Dark and Hell Is Hot. While “Intro” is an explosive offering, it is no match for the sheer impact of “Deep Cover,” giving Snoop the first round

We’re reminded Styles make fights during the second round of this match-up of the dogs. Snoop Dogg continues to draw from his early catalog with his debut solo single, “Who Am I (What’s My Name)?”, while DMX answers the bell with his own “What’s My Name,” resulting in a dead heat.

Doggystyle continues to get mined for material, as Snoop Dogg cues up his 1993 single, “Gin & Juice,” one of his most seismic bangers. DMX, on the other hand, follows suit, drawing from his own monstrous debut album and firing back with his 1998 release, “Get At Me Dog.” This selection also brings about the origin of the record, which DMX reveals was inspired by an exchange with Snoop prior to the record’s creation. “The ‘Get At Me’ phrase, I got that from you,” X tells Snoop. This historical tidbit gives further insight into their relationship and is another sign that the pitbull and the Doberman are in for a dogfight of epic proportions.

Before taking the time to send a shout-out to the chat, Snoop Dogg tosses “Dre Day,” him and Dr. Dre’s lyrical tirade against the late Eazy-E and Uncle Luke, on the table. At this point, DMX misplays his hand, opting for a Ruff Ryders compilation joint that pales in comparison

Snoop Dogg summons the spirit of 2Pac, whom he collaborated with on

“2 of Amerikaz Most Wanted,” from the latter’s 1996 release, All Eyez On Me, bringing an air of nostalgia to the proceedings. DMX, who circles the block with “Stop Being Greedy,” puts forth one of his most bruising bangers, but Snoop’s sole collaboration with Pac gets the win, albeit by a slim margin

With the momentum fully in his favor, Snoop pulls out a big joker early, as his raucous No Limit banger “Down 4 My Ni**az” puts even more pressure on his opponent. However, DMX doesn’t wilt, bringing in “Money, Cash, Hoes,” his monstrous collaboration with JAY-Z, ending this round in a dead heat.

The tempo shifts, as Snoop Dogg serves up one of his more syrupy ditties, “Ain’t No Fun (If the Homies Can’t Have None),” a posse-cut of the highest order. Following suit, DMX comes through with the 1999 Aaliyah collab, “Come Back In One Piece,” which is an admirable selection, but not strong enough to take this round away from Snoop, who shares his affinity for X’s bars on “What These Bitches Want.” In turn, X pays his respects for Snoop’s historic run as part of Death Row Records and gaining a respect for the west coast rap scene from afar.

As the celebration of legends continues, Snoop Dogg looks back at his stint on No Limit Records once again with “Bi**h Please,” from his No Limit Top Dogg album. X gets real festive with amped-up soundtrack selection “X Gon’ Give It to Ya,” which still retains replay value and Snoop remarks is one of his personal favorites out of his catalog. However, it is no match when pitted against Snoop’s flow over this particular Dre beat.

Sticking to the script, Snoop Dogg, who gets inspired to delve into his lyrical grab-bag, pulls another classic from the vault, with “Tha Shiznit,” a melodic groove that showcases Snoop’s sinewy flow. Smelling blood in the water, DMX throws a haymaker with Swizz Beatz-assisted party banger, “Let’s Get It On,” stealing yet another round and keeping the competitive juices flowing.

As the order reverses for the second half of the battle, with DMX now going first, he gives insight into the making of It’s Dark and Hell Is Hot, revealing he wrote three songs within hours of each other, one of them being the It’s Dark and Hell Is Hot cut “F**kin’ wit’ D,” a high-octane thumper that channels the Dark Man’s energy. For a change of pace, Snoop Dogg slows down the tempo with “Lay Low,” one of his more infectious salvos from his No Limit tenure.

DMX goes for the jugular with”What These Bi**hes Want,” a timeless gem, which recently inspired a social media challenge that took the world by storm. Snoop Dogg, who keeps the same energy, doling out “Beautiful,” his collaborative effort with Pharrell Williams, which he recalls being inspired by a trip to Brazil. “I got with my nigga Pharrell, and he was like, ‘Snoop, you gotta tap into your sexy side,’” the Doggfather explains. In spite of that intel, “Beautiful,”’ which may have been a bigger hit, lacks the punch of “What These Bi**hes Want”

Dogs will be dogs, which is evidenced by this round, as both artists play both sides of the coin when it comes to women. DMX’s “It’s All Good” is more of a celebratory anthem dedicated to the ladies. “When you’re a New York nigga, the entire state of California is L.A.,” X shares. “I actually think I did record this out here, for my second album.” Snoop’s appearance on “Bi**hes Ain’t Sh*t,” throws the scandalous ones under the bus and happens to be one of DMX’s favorite anthems in times of marital strife. Both have their place, but Snoop ultimately gets thrown a bone, winning one of the more crucial rounds of the battle.

After taking it to the streets, the party, and the bedroom, DMX and Snoop provide a moment of introspection, as both go with their most personal records to date. DMX, who plays “Slippin’,” shifts the vibe of the proceedings, even tacking on an unreleased verse for good measure. This leaves Snoop Dogg no choice but to retort with “Murder Was the Case,” resulting in one of the more sobering moments of the night.

Realizing he’s hit his stride, DMX continues to delve into his laundry list of collaborative cuts, as he looks to do further damage with “4,3,2,1,” on which he co-stars alongside four of the strongest pens of his error. On the other hand, Snoop makes his most egregious blunder of the night, playing “I Luv It,” a collaboration with The Eastsidaz that may bang in smaller circles, but failed to move the crowd in a big way.

As the end of the regulation draws near, DMX gives us the moment we’ve all been waiting for: “Ruff Ryders’ Anthem,” the song that helped launch him into stardom. Not to be outclassed, Snoop also finished in riveting fashion with “Nuthin’ But a G Thang,” which boasts the introductory verse that will be spat verbatim until the end of time upon pressing play.

To end their face-off, DMX and Snoop each deliver one of their signature records, as DMX runs with “Party Up (Up in Here),” while Snoop comes with “Drop It Like It’s Hot,” both of which are undeniable bangers and regarded as cultural classics in their own right.

While many believed Snoop Dogg had a clear advantage in terms of longevity, hits, and overall discography, DMX managed to level the playing field through timely song choices, often offsetting the vibe and tempo of the rounds. Snoop, who got off to an early lead that looked insurmountable by the end of the first half of the battle, had plenty of firepower to work with, but failed to capitalize on his breadth of material due to questionable song placement in certain rounds. However, after taking every individual round into account, this Verzuz event shaped up to be the most competitive thus far, with both artists giving strong performances and ending the battle in a dead heat. As the vibes were all on a high note, the two icons even threw in a few extra joints for good measure, with X performing his 2003 hit “Where The Hood At,” while Snoop responds with his 2000 guest spot on Dr. Dre’s “Next Episode.” The two then dive into an impromptu freestyle session, with both artists wowing the viewers at home and those in the chat. When all was said and done, according to our scorecard, there was no clear-cut victor. That said, the ultimate winners were the culture and hip-hop fans who were able to witness two music icons celebrate each other and play records that helped shape the sound of music as we know it today.