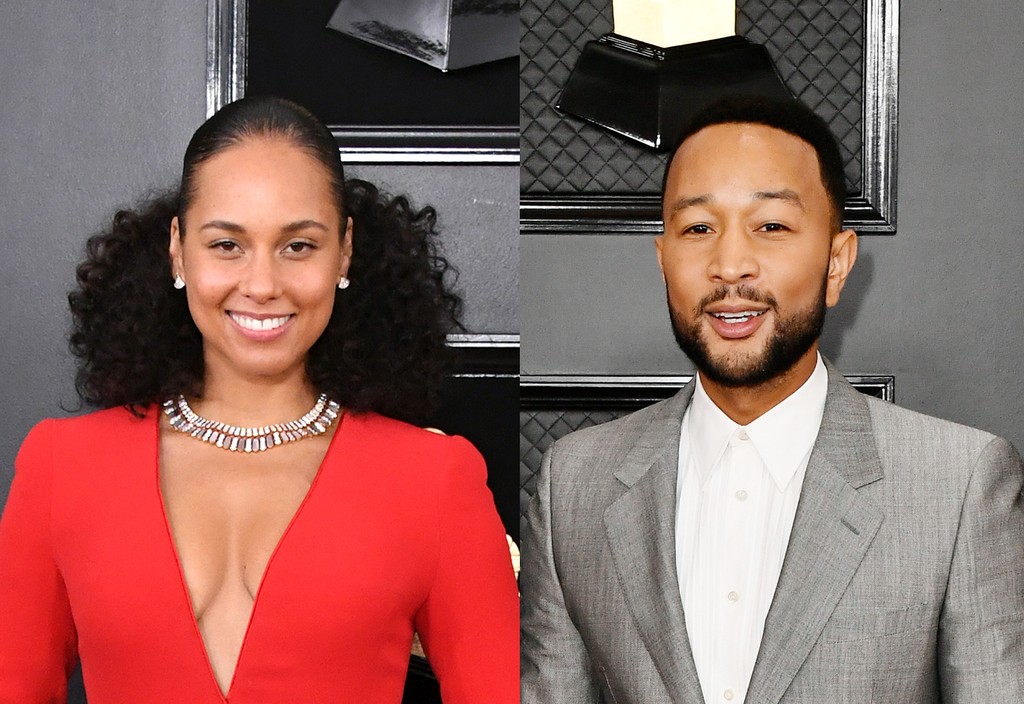 After the collective family service we had with Verzuz: The Healing at the end of May, the Instagram Live event took a small break. On Friday, June 19th, Verzuz returned with a special Juneteenth edition featuring a modern-day dueling pianos between Alicia Keys and John Legend.

For the first male/female matchup of the series, Legend and Keys are—on the surface—a perfect match. They’ve been much compared over their careers, having both emerged at the height of the neo-soul era and becoming the remaining two pianists in R&B. Despite the ways in which they’re similar, the two singer-songwriter catalogues are actually very different, which was evidenced during their celebratory pairing.

Legend, whose latest studio LP Bigger Love debuted on Friday, used the occasion to remind viewers—many of which were core Legend fans that have drifted since he’s gone more Adult Contemporary with his music—why they loved him in the first place. He leaned heavily into his deep discography of features and some uncredited assists fans may not have known of. Keys, who has also released new music with her self-titled album earlier this year, was a little less focused in her playlist for the night but covered all bases from big hits to newer cuts.

This Verzuz wasn’t full of the meme-generating moments, technical difficulties, and quotables that have become the secondary appeal of previous matches. In fact, one of the few viral moments was between comedian Tony Baker and Teddy Riley in the Verzuz chat at the very beginning of the evening. Much like Kirk Franklin and Fred Hammond’s Healing, Alicia and John joined more as a celebration than a battle, jumping on background vocals for each other’s songs and collaborating on select pieces like their collective welcome for the night’s festivities, a rendition of Bob Marley’s very fitting “Redemption Song.”

ROUND 1: Cham feat. Alicia Keys “Ghetto Story Chapter 2” vs. Lauryn Hill’s “Everything is Everything”

In each Verzuz, one of the artists feels less strategic with their lineup than the other. This week, that artist was Keys. Surprisingly so, considering the advantage of having Verzuz head (Captain? Owner? Don King?) Swizz Beatz as a personal coach. Her featured turn on “Ghetto Story” was a bop, but not enough of a favorite to merit an opening position. For Legend, the piano setup allowed him to flex the rules and pull out his first appearance on a major project before he even had a deal: playing the keys on Lauryn Hill’s 1999 single, “Everything is Everything.”

Alicia started the second round with “Underdog,” a track from her 2020 self-titled album. A curious choice despite debuting it at the Grammy’s earlier this year, viewers still don’t know the song that well. John moved into the “things I did with Kanye” portion of his early catalogue (it’s easy, now, to forget that Legend started as part of Kanye’s G.O.O.D Music camp) with the Slum Village jam “Selfish.”

On the third round, Keys gets into her hits, but Legend counters with his debut jammy jam from 2004’s Get Lifted. That “Holla, holla, holla” still goes. Hard.

ROUND 4: Eve and Alicia Keys’ “Gangsta Lovin’” vs. John Legend’s “So High”

The songs were too different in this round to easily call a winner. Alicia wins points for “Gangsta Lovin’” being a somewhat forgotten gem in her arsenal. “I forgot about that one!” is always a plus during a Verzuz event, and part of the reason Swizz and Tim insist that participants have a deep catalogue in the first place. But John’s move into his wedding song tunes, and again utilizing the piano, gave him an edge.

ROUND 5: Usher and Alicia Keys’ “My Boo” vs. John Legend’s “Ordinary People”

“My Boo” is a strong AK favorite. High sing-along factor, high nostalgia. This round should have been a lock for Keys, but John countered with his 2004 seminal ballad “Ordinary People” and sang live at the piano (Alicia didn’t even get all the way into her verse on “My Boo.”)

Keys’ 2009 “Empire State of Mind (Part II)” was an appropriate tribute to resiliency and potential for current times, even if some viewers were wondering why she chose her solo version instead of the Jay-Z collaboration (my guess at the answer: piano). Common’s “They Say” still holds up now, but Keys wins out for sentiment.

This was an uninspiring round for me. “Teenage Love Affair” and “Heaven” are both good songs for what they are and encourage some head-nodding when played. I think they’re songs that nobody turns off or skips, but they don’t exactly go back to listen to them when thinking of these artists either.

In my anecdotal experience, if you poll 20 Black women in their mid-late ‘30s and ask them their favorite John Legend track, a good 15 are going to give “Another Again” as their second choice. If not, their first. (Probably because the lyrics reflect early experience staying in cycles with people they knew they needed to move on from.)

But, Keys’ ode to relationships we have no business being in, the Aubrey Graham co-penned “Un-Thinkable,” is undeniable.

“This Time” is a Legend sleeper ballad from the largely slept-on Evolver, but “If I Ain’t Got You” has all the things we love about Alicia: the keys, the lyrics about devotional love, and one of her best uses of her raspy alto.

ROUND 10: Alicia Keys’ “Try Sleeping With a Broken Heart” vs. John Legend’s “Tonight (Best You Ever Had)” feat. Ludacris

I mean… John’s lovingly awkward two-step aside, do we even have to discuss a round with “Tonight” in it? No, we don’t.

ROUND 11: Alicia Keys’ “A Woman’s Worth” vs. John Legend & The Roots’ “Wake Up Everybody” feat. Common and Melanie Fiona

John Legend and The Roots’ version of “Wake Up Everybody” was poignant for the day (as is their entire 2010 Wake Up! project if you’ve never listened to it), and it provided another opportunity for Keys and Legend to collaborate, but “A Woman’s Worth” is Keys right in her pocket.

I was really, really, really hoping John was going to fully take on Jermaine Paul’s part for “Diary” (he came in with some teases here and there). Still, even without the full “I won’t tell” back and forth we would have all loved to see live, “Diary” is still a winner. Plus, John lost points for having to apologize to Ms. Phyllis (his mama) on air for the curse words in “Blame Game.”

Another uneven round that’s hard to call at face value. Legend reminded us early in the evening that he and Rozay have damn near an album’s worth of collaborations, and “Magnificent” is one of the best ones. But “Like You’ll Never See Me Again” is a “Purple Rain” sample—almost a cheat code. Also, they used “Magnificent” as a Ciroc intermission.

“Superwoman” wins by default here because while John co-wrote “American Boy” and signed Estelle to his brief HomeSchool imprint, he played the song more as a vehicle to tell his career story than as a formal submission towards his 20.

ROUND 15: Alicia Keys’ “You Don’t Know My Name” vs. Rick Ross and John Legend’s “Rich Forever”

Before Alicia and John got into their songs at the top of the night, they mentioned a song they’d both worked on together, but never named the track. That song was the 2003 Kanye-produced “You Don’t Know My Name,” which John provided the soulful “Ooh oohs” for throughout. Legend put up another strong showing in the Legend/Ross collection, but AK did the (slightly stalkerish and not advised under modern social norms) call to “Michael” live, and that alone is a winner.

WINNER: Keys but really Legend because he sang the “Ooh’s” live.

Whew, those Black couple references in the beginning of “Unbreakable” have not aged well over the last 15 years, and the instant retro feel of the track wasn’t enough for us to overlook it. Legend’s “Green Light” with 3 Stack’s beloved voice shined a little brighter as we all tried to let that cringey moment go.

This round is tough, because while AK’s “In Common” was a groove, the song never really gained traction (despite SNL performances, ad campaigns, etc). Legend and Aiko’s “U Move, I Move” also feels like a groove, but is fresh-out-the-box new and a single on Legend’s new album.

“Girl on Fire” is one of Keys’ biggest hits. But it was so ubiquitous at its height, no one really wants to hear it anymore. Collective sighs and groans rippled throughout the internet from the beginning of the song. Fortunately, Keys herself seems to know everyone’s tolerance for “Girl on Fire” is low; she kept it short. Legend’s own ubiquitous monster, “All of Me,” was going to win whatever round John decided to play the song anyway, so just as well.

“Higher” was a Grammy winner, a number one hit, and has become a tribute to Nipsey Hussle, having been released immediately after his death. But “Fallin’” is still magic, from those opening notes that wanna-be singers butchered everywhere throughout 2001. No contest.

Let’s just skip over the “No One” moment because “Glory” is an Oscar-winning song and a Black freedom anthem and John gave a history lesson on Juneteenth while introducing the track, so we don’t even need to talk about anything else.

WINNER: The Fight for Justice

The two closed out on solemn and pensive notes for their benediction offerings. Keys with her latest tribute to the many Black lives continuously being cut short without justice; and Legend in response with one of his new tracks, a story of the strong foundation of love, that can also be applied to our endurance and our fight in the face of injustice and tragedy.

They came marching in the city that day, they say

Carryin’ signs in the street

Cryin’ eyes in the streets

But they heard nothing from the city that day, they say

Just another one gone

And the city moved on

Built on a foundation

As the water rises

And the mountains shake

Our love will remain

Friday night’s Keys and Legend card wasn’t as eagerly anticipated or as big a draw as some previous Verzuz matches. They were also competing with no small amount of virtual Juneteenth programming, including a Friday night R&B concert series Keith Sweat hosts in partnership with iHeart Radio. But it was a fun night, a good reminder of the power of live musicianship and good songwriting (or, as Legend said frequently during the night, “a copyright”), and just a good vibe all around. The ultimate winner, as with all Verzuz matches, was the music.