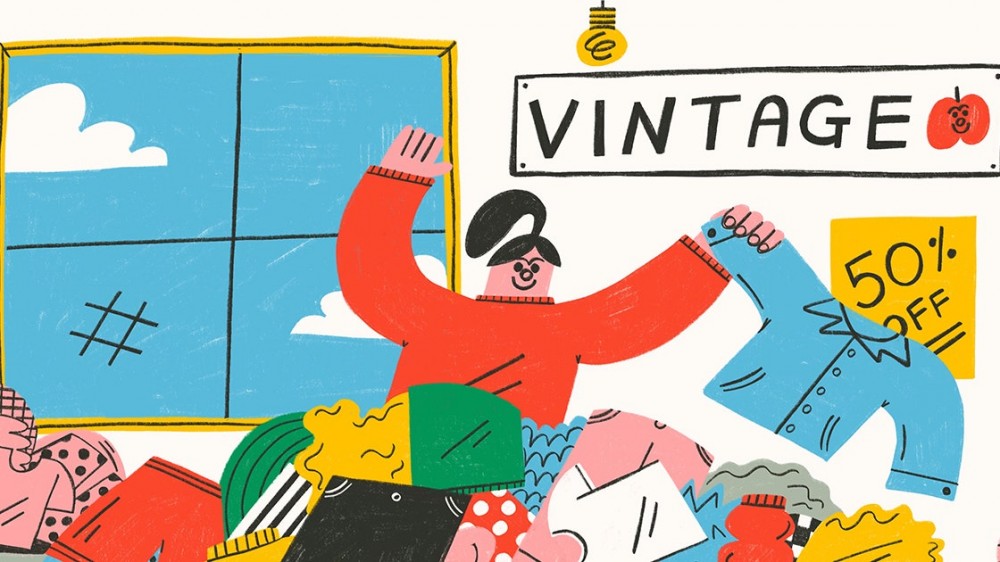 Ask anyone who knows me well to name my most prized article of clothing and they’ll tell you the same thing, without hesitation: a vintage Seventies-era Wrangler denim jacket. I found it in a dumpster in an unmarked warehouse in St. Louis, Missouri in 2002. It was an invite-only unmarked warehouse, lest you get the wrong idea. And of all the dumpsters full of vintage clothing, this particular dumpster chose me, illuminated as if by the flickering bulbs of a marquee arrow only I could see. The perfect light layer over a t-shirt, or the Rochas dress I wore to my own rehearsal dinner, the jacket is medium Wrangler blue, and I recently saw the same exact cut —cropped to hit at the waist, with the brand’s signature Western stitching on the brass-buttoned breast pockets—in an archival image of Debbie Harry performing live with Blondie. Hers was a dark indigo denim. Mine is better.

Being able to dig through piles of used clothing and emerge with such a treasure—the kind of find that could easily sell for $250 or more at a Tokyo vintage store—is equal parts luck, skill, and instinct. And to work at the now-shuttered St. Louis outpost of the legendary Midwestern Buy-Sell-Trade store, Rag-O-Rama, which was located a few blocks from the off-campus apartment I moved into as a sophomore at Washington University, it was also a job requirement. When presiding over the “buy” counter that faced the Delmar Loop, there was an objective set of rules that determined whether something was a buy or a pass. Anything brought in by a customer—a vintage dealer; a young mother; the couple behind the local modeling agency; an aging hippie; a junkie—that was stained, damaged, or child-sized, was an easy “pass.” But the art of the “buy” was in the subjective: Would that bowling shirt sell? Was there a market, however small it might be, for those authentic lederhosen from Bonn, Germany? Did we need more lightly-used Diesel jeans? And above all: did I think anything in the trash bag full of closet castoffs that came through the glass doors and the Nag Champa haze had enough cache to make it onto our racks in exchange for 35% of the resale price in cash, or 50% in trade? During the week, I was an English major with a minor in Social Thought and Analysis; on the weekends, I was fashion judge, jury, and executioner.

I came by the work honestly. In search of paper-thin ringer tees and flannel shirts, disco-era fur-lined suede jackets, 80s puffers, and worn-in denim that my older sister and I would slit down the sides to make into flares with colorful fabric inserts, I spent much of my Philadelphia childhood frequenting the city’s vast network of Village Thrift stores. I was attracted both to the accessible prices—$5 items marked ½ off depending on the color of the paper tags (easily switched before checking out)—and the thrill of the hunt for clothes that were thirty, and sometimes forty years passed their production date, with decades of history sewn into every stitch. Even at 13, I found comfort in the camaraderie between other pickers roaming the aisles, the soft rock hits that cackle through old speakers, whether you’re at a Salvation Army in Whitefish, Montana or a Savers in Providence, Rhode Island; the satisfaction of sorting through your haul when you get home, exhausted by the effort and maybe a little congested from the musty vapors of the past.

There was something to the exercise of deconstruction and reconstruction, in taking something as it was, and breathing new life into it without blotting out where it came from.

I first arrived at Rag-O-Rama as a customer after a rocky transition from the East Coast to the Midwest. Before packing up a U-Haul and driving 15 hours with my father to my freshman orientation, I couldn’t even identify St. Louis on a map. When I arrived, I was immediately homesick, not just for friends, family, and my boyfriend— who matriculated at Brown with the ease of a liberal elite settling into an elite liberal institution—but for the diverse city I grew up in, which I could not find in the manicured monoculture of freshman dormitories and fraternity parties. When multiple attempts to transfer to an East Coast college proved unsuccessful, I spent my weekends driving up and down highway 64/40 and Interstate 44, finding solace in a well-researched route of St. Vincent De Pauls, Goodwills, and Value Villages. I shopped for myself and to sell for a profit, a small side hustle that helped fill my days and my pockets. My roommate brought her grandmother’s Singer sewing machine up from Springfield, Missouri and we cut and re-fabricated old garments into new ones, sipping beers under the fluorescent lights of our triple capacity dorm room while our third roommate pledged a sorority. Some of those failed experiments found their way to Rag-O-Rama, too.

These pieces were not particularly impressive—an easy “pass,” if I’m being honest—but there was something to the exercise of deconstruction and reconstruction, in taking something as it was, and breathing new life into it without blotting out where it came from. I can’t tell you the name of a single one of my professors from the four years I spent at Wash U, or reference the required reading lists from the classes I took to earn my undergraduate degree. But I can easily rattle off some of my best finds from my time at Rag-O-Rama: an impossibly soft, original Peaches Records logo baby tee that I stupidly sold years later; a pair of high-waisted black, boot-cut Brittania jeans that I nursed through multiple rips and patches; rare, original Air Force 1s that I still have (and wear!); and the Wrangler jacket, which outlasted my boyfriend from Brown, who memorably told me that pursuing a career in fashion was a “waste of time.” That jacket has kept me warm and protected—like a piece of medium-blue denim armor—from St. Louis to New York, and eventually London, Milan, and Paris. A small tear on the left elbow recently became a much bigger one, and I considered making a repair before thinking better of it.