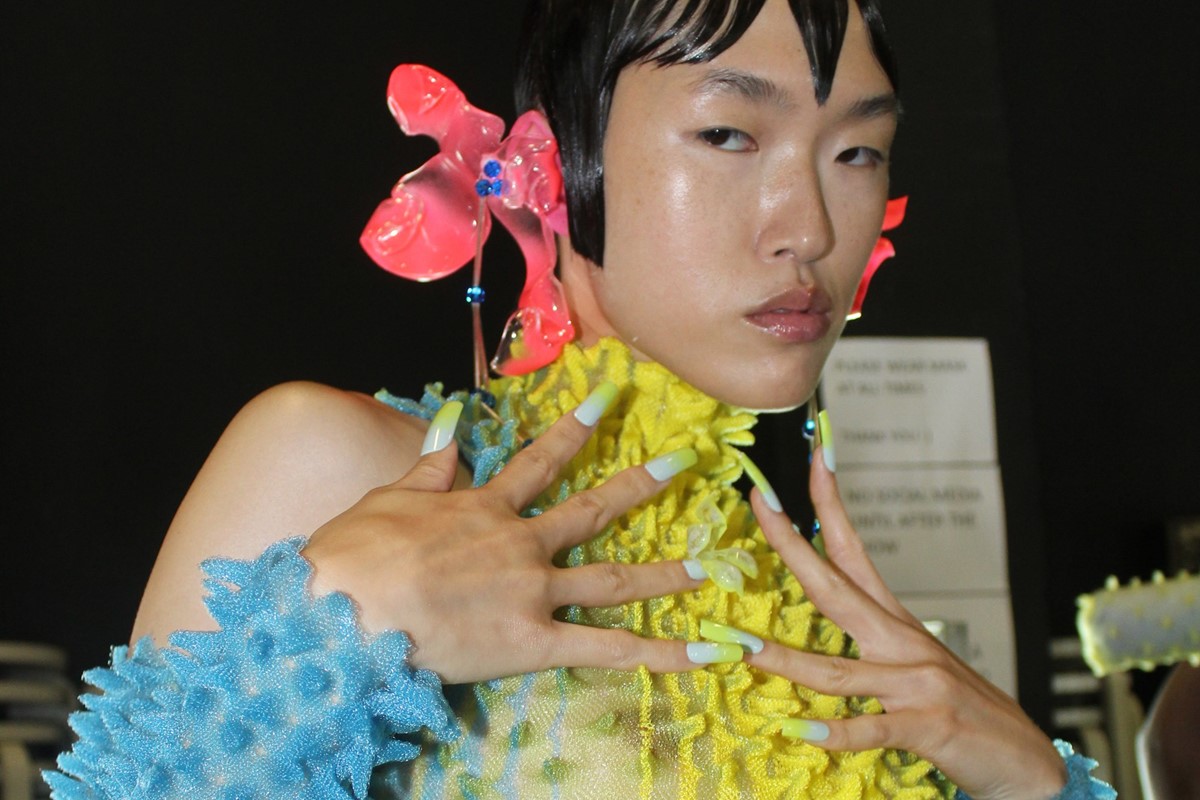 Looks like I’m going for a swim! From Chet Lo to Jawara Alleyne and HRH, to Maximilian and Goom Heo, this season’s cohort cannonballed into London Fashion Week

Fashion East made its IRL return to form yesterday evening, taking over the vaunted Institute of Contemporary Arts in London to showcase five of the city’s most interesting talents. Given that recent graduate Nensi Dojaka bagged the LVMH Prize at the beginning of the month, this cohort shouldered an increased pressure to align themselves with Lulu Kennedy’s burgeoning black book of success stories – among them Craig Green, Grace Wales Bonner, and Mowalola. And beyond its mushrooming reputation, many of this season’s Fashion East recruits were actually runway virgins, having graduated from Central Saint Martins in the crush of lockdown. That’s particularly true for Chet Lo, anyway – Kennedy’s newest cub – who joined sophomore Jawara Alleyne, and old-timers Maximilian, accessories designer HRH, and Goom Heo. Below, we break down Fashion East’s SS22 show, from sexy palm fronds to spiky swimming floats.

Marking his third season with Fashion East, Maximilian Davis took his scant but sophisticated handwriting and housed it within a coterie of beachy, swimwear references – paying homage to childhood holidays spent in the Caribbean, the work of Trinidadian photographer Nadia Huggins, and wanting to look hotter than everyone else when lounging poolside. It was “pose-wear” Davis said, sending out bands of barely-there fabric strapped across intimates, gauze-like, flouncy dresses cut in the designer’s diamond motif, and half-dressed sailor jackets. Elsewhere, LBDs were shredded at the bust as high-shine vinyl trousers begged for sweat, while triangular velveteen inserts came indebted to Davis’ grandmother’s sofas in Manchester. The show then came to an otherworldly close when an oil-slicked bond girl strutted into focus, harnessed in rubber palm fronds by Nasir Mazhar.

During his second outing with Lulu Kennedy’s incubator, Jawara Alleyne pushed his signature rag-tag draping and swashbuckling, multi-layered pieces into a darker, grungier direction. As models posed alongside scrawny mannequins, contorted into impossible and uncanny positions, clothes seemingly fought to stay in one piece. Jeans, t-shirts, and jersey dresses were held together by a sweep of safety pins, as tendrils of moody distended sleeves had been tied together like flags on a mast pole. Squares of frayed, tangerine suede were pinned into flared trouser shapes, as if the models themselves had been mangled and haphazardly put back together. These pieces were not slapdash, however. One bulk-shouldered, asymmetrical gown – Alleyne’s first womenswear look – which had been knotted at the waist and sleeves, framed his model in near-mythological stature.

Beloved on the celeb circuit – see Doja Cat, Sza, and Kylie Jenner – Chet Lo’s trademark pinch-and-twist designs have become an editorial staple over the past year. It would make sense, then, that Fashion East should bring the Central Saint Martins graduate into the fold, presenting an “unabashedly sexy” collection for SS22. Once again this season, we see a designer inspired by hot summers spent being even hotter. And, er, synchronised swimming (if those fluorescent bonnets have anything to do with it). Lo’s spiky fabrics had been cut into a coterie of sassy, sheer, and swooping designs. Strappy halter-necks, asymmetric two pieces, and track jackets were testament to the elasticity of his aesthetic. Enormous bags were slung over shoulders as if they were those foam noodles you find in a swimming pool, while barbed footwear vined their way around legs like pillowy caterpillars.

Having taken the sudden decision to move back to her home country in the middle of the pandemic, Korean designer Goom Heo was working from a place of anxiety this year. Where those feelings came from, however, she’s not entirely sure. Either way, the designer, who has been a member of Fashion East since 2019, worked through displacement and discomfort via her SS22 collection, which was suspended in inbetween-ness. Wrap-around jersey pants were printed with a heavy, indigo denim wash, spiralling up the leg with trompe l’oeil effect. Smart trousers were constructed with two satin front layers and an elasticated waist – as if they were layered with running shorts. And formal, wide-shouldered draping suddenly plunged into Y2K-indebted teal miniskirts. Perhaps, like Goom Heo’s own inner world, the result defied clear explanation. Clothing that was neither one thing, nor the other, but feeling everything at once.

Can anyone confirm if Fashion East has moved its HQ to a leisure centre this season? Another swimwear-inspired collection was to be found in HRH, which took its references from the competitive world of swim meets. As such, her small but punchy line of accessories looked as though they could have been amulets picked up from the murky depths, or perhaps awarded to prize winners at a poolside ceremony. Bronze, silver, and rose gold bags, crafted from pig skin dangled from the fingers of models within HRH’s Nick Knight-inspired lookbook. Elsewhere, frameless, diamante-studded sunglasses and shiny, cut-out swimsuits formed part of Hannah’s (the designer only uses her first name) expansion into full look fashion. From her ultra-mini bags to her scrunchie-armbands, this was a bold and brassy ode to the gaudy naughts.