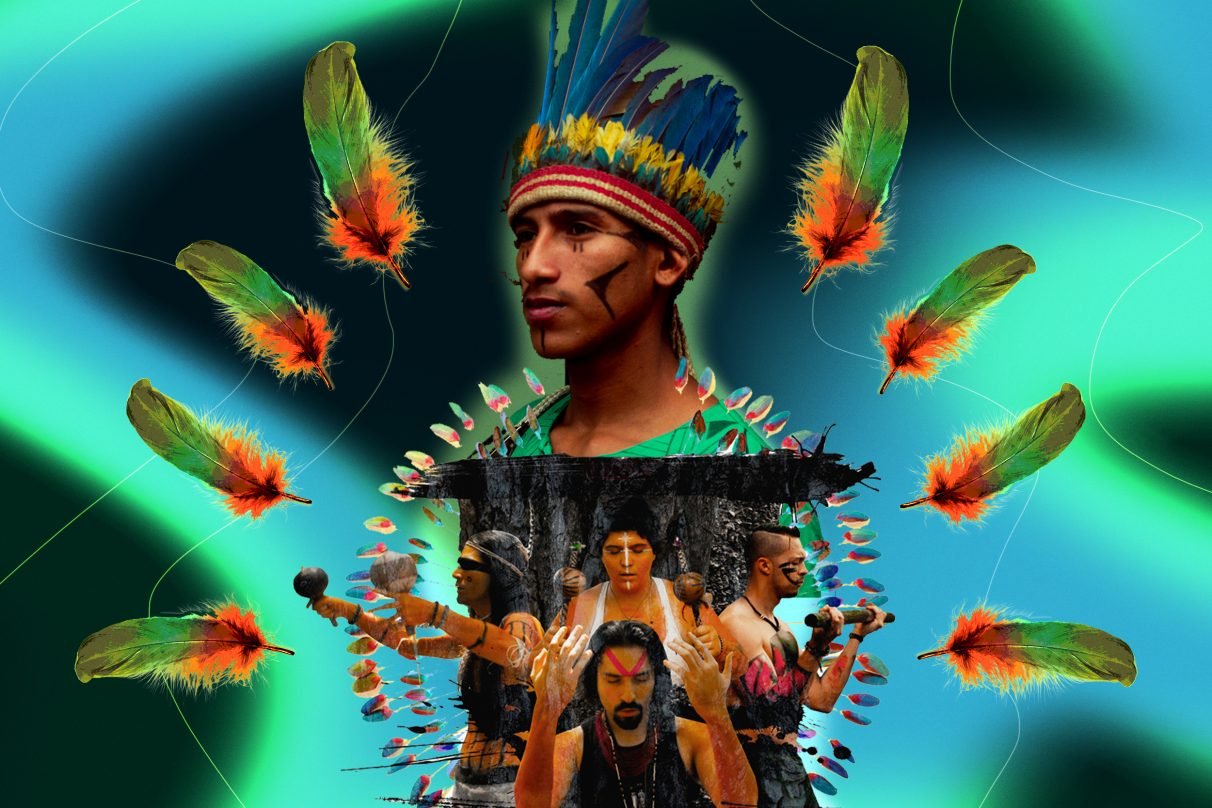 It’s no secret the Amazon Rainforest and Indigenous Brazilian peoples have been endangered for ages — it’s a historical issue that has only worsened by the election of President Jair Bolsonaro. Fires and deforestation are currently ravaging fauna and flora, while Indigenous people have to deal with the increasing illegal exploits of land grabbers, gold diggers, poachers, illegal loggers, hitmen, and drug traffickers, just to name a few. The Indigenous plight and the conservation of the rainforest are intrinsically interlinked struggles.

On September 5th, the international environmental NGO Greenpeace Brazil released “Canção pra Amazônia,” or song for Amazonia. It gathered 30 Brazilian artists to be featured on it and had the support of Indigenous leaders, ultimately premiering on TV Globo’s Sunday variety show Fantástico. As stated by world-renowned Indigenous leader Sonia Guajajara to Globo, the song aims to cross frontiers and “echo” as far as possible, as “we are united in a call to defend” the Amazon rainforest. The song featured well-recognized names like Gilberto Gil, Caetano Veloso, Gal Costa, Maria Bethânia, and Milton Nascimento. And while it also included up-and-coming artists, “Canção pra Amazônia” only showcased two artists of Indigenous origins: Djuena Tikuna and Thaline Karajá.

Brazil is home to 850,000 Indigenous peoples. Distributed among 300 communities plus some uncontacted groups, their reservations cover 14% of Brazilian territory. Though they have the lightest footprint on the planet, they bear the mounting consequences of climate change. And the lack of focus on Indigenous Brazilian artists on “Canção pra Amazônia” is yet another example of Indigenous peoples taking the backseat to their own causes.

In light of this reality, we’ve compiled a list of talented Brazilian artists with Indigenous roots that have been using their voices and platforms to protest the abuse their peoples have been suffering since colonial times, which include those linked to the Amazon rainforest.

A member of the Tupi-Guarani people and hailing from the Krutuku village in São Paulo, the artist formerly known as Kunumí MC gained national attention during the 2014 Soccer World Cup in Brazil. The now 21-year-old was part of a group of children who entered the soccer field alongside players before the game took place. As part of the opening ceremony for the World Cup, he was representing the Indigenous populace — an opportunity he took to protest by holding a small banner reading demarcation now. It was meant to point out the territorial struggles of Indigenous peoples. As the son of respected Indigenous writer Olívio Jekupé, the young talent raps with an arrow sharp tongue about Indigenous struggles and environmental issues. Last year, Owerá released the protest single “Xondaro Ka’aguy Reguá” (forest warrior). Five years ago, Owerá introduced the album Every Day is Indian Day, while his first album, My Blood is Red, was released to the world by the English label Needs Must Film in 2017.

Owerá is blunt when it comes to the Amazon. September 5th is Amazonian Day, and he wrote in a post that “It is not a celebrative day, but rather for awareness. We are talking about the largest natural reserve on the planet. We can’t normalize its destruction. The first thing we need to have is consciousness about the reality the Amazon faces.” According to a statement, Owerá is recording a new song that will be called: “SOS Amazônia.”

Cited as a major influence by Owerá, Brô MC’s is the first Indigenous rap group from Brazil. The foursome composed of Bruno Veron, Clemersom Batista, Charlie Peixoto, and Kelvin Peixoto comes from the Jaguapirú and Bororó communities in the city of Dourados, in the middle western state of Mato Grosso. They are from the Guarani-Kaiowá ethnicity and started their musical path in 2009. Their lyrics largely cut through Indigenous identity and land rights, but they also center their music on drug abuse and the high numbers of suicides among indigenous communities. Native peoples are known to deal with PTSD and other mental health issues caused by the centuries of physical, physiological, and economic hardships imposed on them by the government and society.

Singing in Portuguese and Guarani languages, Brô Mc’s strives to uplift Indigenous cultures. In a 2020 interview, Kelvin Peixoto related how the racist speech of Bolsonaro directly exacerbated the situation at the Amazon rainforest, leading to the increase in invasions of the area and violence from farmers.

This multilayered artist positioned herself and her female contemporaries as the “granddaughters of the Indigenous women you weren’t able to kill” in her song “Xondaria” (female warrior), rapped in Guarani Mbyá, the language of her people. The bold attitude is owned by someone that has to fight just to be herself, not only as an Indigenous woman but also as a bisexual and an activist mother living in the impoverished urban area of São Paulo. Her voice flows between rap and trap, showing the versatility and adaptability of a ranging creative. She’s also a composer and an actress, and her talents have led her to be part of a Levi’s Jeans campaign and land a cover of Brazil’s Elle Magazine.

Katú Mirim is considered an “índia urbana,” an indigenous woman who lives in a city, therefore breaking the stereotypes that native peoples all live in the depths of the rainforest. But that doesn’t stop her from advocating for it. In a recent post, Katú expressed that if the Brazilian justice system votes for the Marco Temporal, it “will make several indigenous peoples leave their territories” that will be taken by “genocidal companies that only want to kill our mother earth.” Translated as the Time Limit Trick, this legislation determines that Indigenous peoples can only claim the demarcation of lands established during the birth of the Brazilian constitution in 1988, including the lands at the Amazon Forest. She called for resistance and added, “Our people did not start in 1988 as this concept says. Our peoples are from incalculable times in Brazil and Brazil is Indigenous land.”

2008 spawned Brazil’s first Indigenous heavy metal band: Arandu Arakuaa. Started by Zândhio Huku, the group from Brasília sings in the Tupi-Guarani language, while adding traditional Brazilian sounds such as the folk 10-strings guitar and Indigenous instruments to their heavy-metal repertoire. Though the band’s ranks include non-Indigenous members, which ultimately shows miscegenation commonly seen in the country, their voices bring Indigenous lore and their everlasting fight to the forefront of their music.

Arandu Arakuaa has also spoken against the attempts to take over Indigenous lands via the Marco Temporal, blaming “the genocidal government that has already caused many damages to the forest and its guardians.”

The image of Djuena Tikuna singing the Brazilian National Anthem in the Tikuna language during the opening ceremony of the 2016 Olympic Games in Rio sent a strong message throughout the world. This not only represented the acceptance of people that have been historically shunned but also their capability of overcoming the odds. A singer, composer, and journalist, Djuena is part of the Tikuna people. She was born in the Umuriaçu II village in the city of Tabatinga in the Amazon state in the North region of the country, partly located in the international Amazon rainforest. In 2017, Djuena released her first album: Tchautchine. Her songs revolve around the strength to endure inherited by Indigenous peoples. As mentioned earlier, she was also part of the Greenpeace Amazon campaign.

One of her latest releases represents her never-say-die attitude towards her homeland: “Amazônia Indomável” (indomitable Amazon).

A member of the Karajá people, Narubia Werreria wrote the song “Essa Terra é Minha” (this land is mine), which was the soundtrack for Brazil’s Indigenous Day special on TV Globo’s Falas da Terra (words of the land) this year. The TV program featured Indigenous people working both in front and behind the cameras, which is unfortunately still rare these days around the world. The version of the song that aired on the show featured Werreria and fellow indigenous singers Thaline Karajá and Edvan Funi-ô. The show marked a historical event for Brazilian TV, considering the lack of voices and opportunities for Indigenous peoples in Brazilian media.

Werreria is also an activist that has spoken against the violence in Indigenous territories, including the Amazon, where she comes from. Alongside the “Canção pra Amazônia” collaborator Thaline Karajá and Márcia Kambeba, they formed the musical trio Indá Açú.

Brazilian funk has surpassed the limits of Rio de Janeiro’s favelas, gaining turf abroad through the work of artists like Anitta. But at the home base, the rhythm spread to every corner of the tropical country thanks to many different musicians throughout the years, including Nory Kaiapo. A son of the Kayapo people living in the Indigenous land of the Novo Progresso city in the Northern state of Pará, Nory employs his native tongue and sings about the joys of life — including love and relationships. Bringing a refreshing vibe that focuses on dancing and overall joyfulness while embracing his roots, Nory shatters the notion that Indigenous people can only chant traditional music or aren’t tech-savvy, bringing a much-needed levity in a world of trouble.

“Our Indigenous Kayapo people won’t let our forest and territory burn, it is our trading place, hunting grounds, plantations for our children and others. Therefore, we are fighting together to keep the Amazon alive,” Nory tells Remezcla. The young musician also mentions how the lack of access to a studio impedes him from recording new material, noting how Indigenous musicians deserve better opportunities as much as any other musician.

Besides his career as a singer, Nory is also a gamer and a Youtuber, where he shows traditional parties of the Kayapo people that are an act of resistance in itself against the forces vying to steal the Amazon.