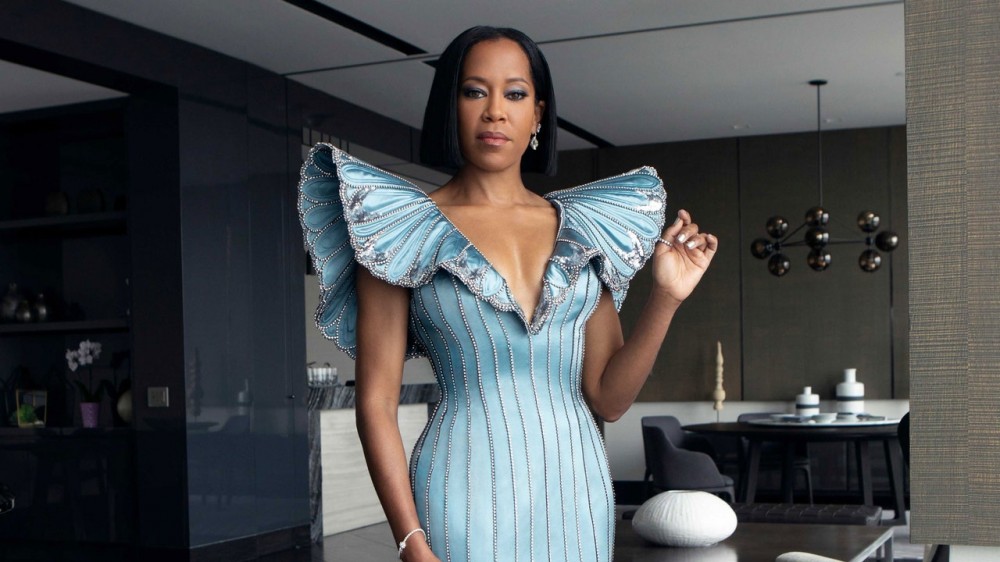 Regina King has been an awards season fixture for the last two decades, but 2021 marked a new chapter. Already an Oscar-winner thanks to an unforgettable acting performance in 2018’s If Beale Street Could Talk, King began the year by making her directorial debut with the critically acclaimed adaptation of Kemp Powers’ play One Night in Miami… The film racked up three nominations at tonight’s ceremony, and as a result, King has been a chic presence at nearly every show this season. The wardrobe selected by King and her stylists, Wayman Bannerman and Micah McDonald, has been exceptional—a fiery Christopher John Rogers gown at the CDGA celebrations, irreverent Schiaparelli couture at the Emmys—but the Academy Awards are no ordinary ceremony. The night called for a pièce de résistance. Enter Louis Vuitton’s creative director, Nicolas Ghesquière, who dreamed up a gown worthy of the occasion. “We always try to tell a full story,” shared McDonald on the phone from Los Angeles. “So we had to make sure that the finale was a proper ending to a beautiful season.”

For Bannerman and McDonald, Ghesquière was the ideal collaborator. “He’s committed to bringing high fashion in its truest sense to the carpet,” says Bannerman. “He doesn’t just design an awards season dress. He gives you his unique interpretation of what that can be. I love the consistency that he brings and attention to detail—the gowns are just as beautiful on the inside as they are outside.”  After collaborating with Vuitton on King’s gilded, asymmetrical column gown at the Golden Globes, they wanted something different for the Oscars. King’s pale blue duchess satin flared dress goes in an otherworldly direction, with its fantastical ruffled shoulders and gradation of silver sequins.

Crafted over the course of 140 hours in the Vuitton atelier, the piece features a record-breaking number of Swarovski crystals for the house. With 62,000 sequins, 3,900 pale sparkling stones, 4,500 in darker tones, and 80 meters of chain stitching, the look is a museum-worthy fashion spectacle—precisely what Bannerman and McDonald had in mind. “We wanted to keep that element of fantasy,” says Bannerman. “For Regina, this is a new move in terms of the look’s architecture and silhouette.”

King’s Vuitton gown is sure to start a conversation. And for Bannerman and McDonald, the tête-à-tête around celebrity fashion is an essential part of Oscar night’s excitement. “All of Regina’s looks this season were conversational; they’re designed to evoke a reaction in the audience watching,” says Bannerman. “We wanted to bring something special that lifts the spirits. After everything we’ve been through in the past year, we wanted to create beautiful imagery that people can sit at home and be inspired by or talk about with their friends and family. We’ve been moved by the messages we receive from people about these looks, so we want to make sure to contribute something uplifting.”