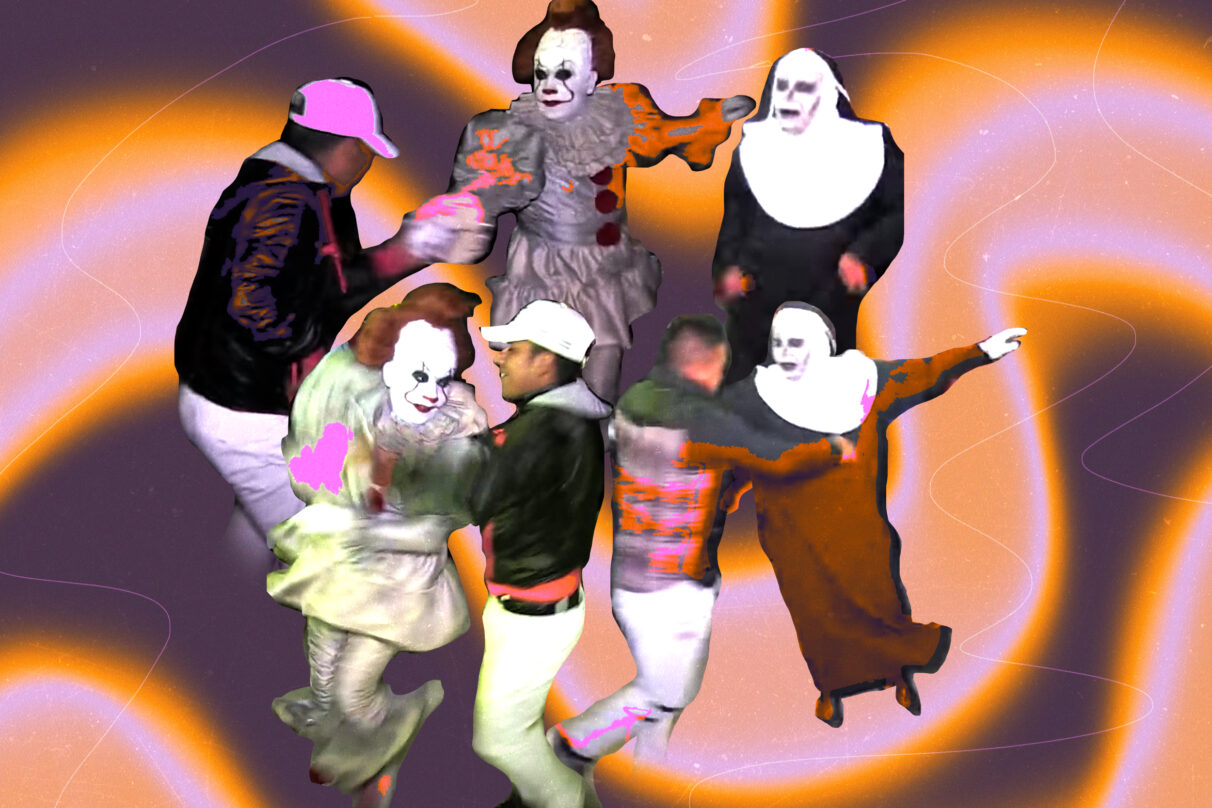 Let’s be honest, a party isn’t a party unless there is some cumbia playing. The rhythm is infectious enough to call everyone— even a couple of spirits—to the dance floor. And at this point, cumbia is a global force that’s snaked its way through all of Latin America from its origin in the Caribbean Coast of Colombia. As time and taste have evolved, Colombian cumbia has shifted into techno cumbia, cumbia sonidero, chicha, and so much more.

Luckily for those of us leaning into the spooky vibes of the holiday, there are plenty of creepy cumbias to pull out this Halloween. We’ve got you covered whether you’re two-stepping on a patio, house party, or just alone in your living room.

Hoping to make contact with some extraterrestrials? The Meridian Brothers know the way. Looking to summon powerful spirits from the great beyond? Grupo Jejeje’s cumbias rebajadas are for you. If keeping it classic is your jam, then Grupo Lazima is your best bet for a Latine spin on the quintessential slasher boogeyman. And if you like your cumbia better suited for the monthly goth night, La MiniTK del Miedo has something for you.

The theme song to John Carpenter’s slasher classic Halloween has been sending a chill down the spine of listeners for decades. The haunting, synth-based theme is simple enough and was actually written by Carpenter himself. Here, Grupo Lazima puts a new spin on a seasonal classic. They borrow the iconic synth line from the 1978 horror film and add a güira and some drums for a cumbia spin. Michael Myers isn’t known for being light on his feet, but even he would feel compelled to do a little two-step to this theme.

There is no figure spookier in the public imagination than the archetype of evil himself—Satan. La Tropa Vallenata isn’t scared, though. The song opens with a man with a gravelly voice on the hunt for Satanás. He’s looking for a lover to dance with, and turning his sights to hell after he’s struck out in heaven. The singer’s growl pairs nicely with the buoyant horns and quintessential cumbia drums in this song. Subject matter aside, and as their name would suggest, La Tropa Vallenata’s approach is solidly rooted in the cumbia offshoot from Colombia, vallenato.

A collaboration between producers Turbo Sonidero and Arrabalero, Grupo Jejeje delves into the depths of cumbia with their downtempo synth and sample-based tracks. Here, they collaborated with the king of cumbias rebajadas, Gabriel Sonido Dueñez, to make a sludgy song even sludgier. With “Nefertiti,” Dueñez takes the haunting electro cumbia and imbues it with a sinister energy. A synth line steps in as a percussion element and the scratch of the güira is slower and more forceful, making the perfect soundtrack for a late-night, foggy walk through the cemetery on Halloween night.

If you had to pick a song to draw aliens into our stratosphere, it’d have to be this one by the funky, experimental Colombia-based Meridian Brothers. The woozy, otherworldly sound of theremin snakes through the track. I’ve never thought a theremin—an electronic instrument played without any physical contact— would make me want to dance, but the Meridian Brothers proved me wrong. For extra spooky alien vibes, try the rebajada version.

Okay, so maybe the odes to Satan or all this talk about exorcisms won’t be a hit with your mom or abuelita this Halloween. Still, they’re sure to love “Cumbia de los Muertos” by the crowd-pleasing cumbia giant Celso Piña. The Mexican singer, composer, and accordionist, who passed in 2019, celebrates the spirit of his ancestors with buoyant reverence on his version of the cumbia. Here, Piña and Colombian rapper Cabas remind us there is plenty of life to be celebrated after death.

Fans of The Sisters of Mercy would be proud. With “El Exorcismo,” Colombia’s La MiniTK del Miedo has produced something that sounds like the ghost of a cumbia. The track is a brooding, atmospheric song with stark drums and synths that mimic reverberating church organs, and vocals that invoke a spirit’s sinister whisper. The percussive backbone of any cumbia song has slowed all the way down, leaving behind the vibrant pace of the genre in favor of a pace more akin to a funeral march. The band that calls their music “cumbia espantosa” made an anthem that feels like Halloween all year round.