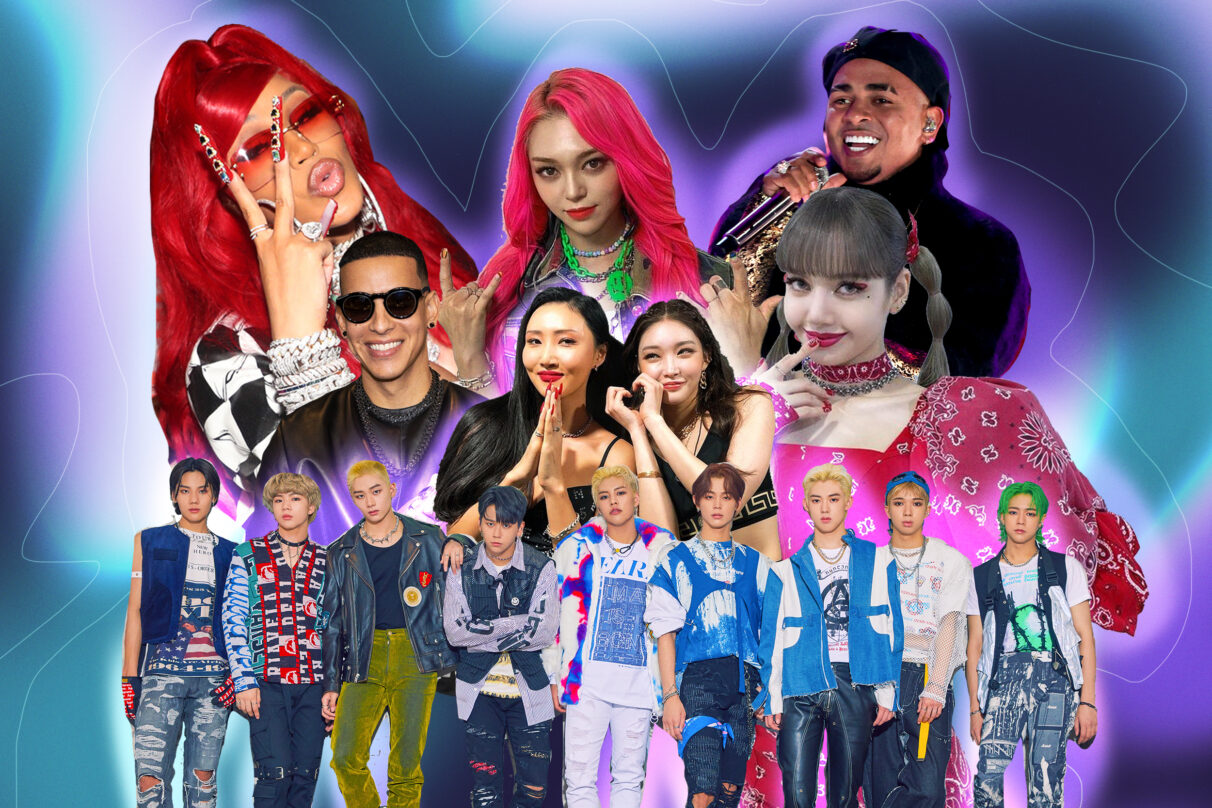 For visual performers or artists, inspiration can come from just about anything in your surroundings—paintings, photography, symbols, or even music. Through various outlets, artists will always give credit and admiration where it’s due to whoever inspired their upcoming projects. In doing so, they show their appreciation for other artists’ works by creating new and fresh interpretations of the original. In the music industry, famous singers and performers find themselves making covers of original work to not only show respect to the original artist but to display their own respective talents as well.

In particular, K-pop artists have vocally expressed their musical performance influences from a variety of genres and artists around the world—especially from Latine musicians. With the intent to expand their musical abilities and succeed in the Latin American market, K-pop idols seek to show their hard work and skillset by creating dance covers from well-known dance tracks by artists with Latine backgrounds. By crafting choreography through dance—which K-pop acts are particularly known for—it gives an interpretation that cannot be done through words alone. It also provides a visual experience for fans and viewers online while showcasing the K-pop artist’s desire to pay homage to the original artist.

When it comes to our pop stars, they perform in a different dance style that differs from what you’d expect to see in K-pop performances. Since most of our artists don’t typically have a full-fledged choreography made for every song and performance, we love to see when K-pop idols take on our favorite Latine songs and create a new interpretation with their well-renowned dancing abilities. With that said, here are a few dance covers by K-pop idols that’ll impress you with the talents that they have to offer.

BLACKPINK’s main dancer and lead rapper Lisa performs a flawless and clean choreography of Camila Cabello’s notoriously famous single, “Señorita.” With choreography created by the YG Entertainment choreographer RARMG, also known as Eunyoung Park, Lisa stuns alongside her backup dancers in this short dance cover. Lisa was able to perform this choreography live for fans (otherwise known as BLINKs) during the group’s world tour in 2020 for her solo stage. The synchronization and body control within the choreography is mesmerizing, leaving many that watch her performance in awe of how simple she makes the choreography appear. Both the talents of Lisa and her backup dancers show the dedication in their craft and express the sentiments from the Cabello fan-favorite single. There’s just something about Lisa’s dancing that’ll always grab fans’ attention, whether it’s in solo dance projects or group promotions with BLACKPINK.

Last week, Lisa hopped on DJ Snake’s “SG” with Ozuna and Megan Thee Stallion, marking her first solo collaboration with a Latine artist. BLACKPINK, on the other hand, has previously worked with both Selena Gomez and Cardi B on their LP THE ALBUM.

Amongst a list of K-pop idols that created their own unique dance choreography for the moombahton banger “Taki Taki,” the ladies of Dreamcatcher caught the attention of over 5 million viewers on their 2019 dance cover. Featuring the group’s JiU, SuA, and Yoohyeon, they performed a dynamic and charismatically driven take on the DJ Snake collaboration track featuring Ozuna, Selena Gomez, and Cardi B. With choreography created by SuA herself, fans left comments praising the girls for their impressive dance skills that equally showcased the underrated talents that the members of Dreamcatcher have to offer. From the hair flips to floor choreography, this cover is certain to draw your eyes to their stand-out original choreography. Dreamcatcher is known in the K-pop music industry for performing difficult choreographies with ease on and off-stage, so this dance cover only shows a fraction of the talents, skills, and on-stage auras these girls put into their performances.

The six-member male outfit OnlyOneOf paid their respects to Rosalía with a passionate dance cover of her single “Malamente.” In the description of the group’s YouTube video, it is stated that her track attributes “massive influence” onto the career of OnlyOneOf, going as far as influencing the symbols and metaphors used in their own debut single “savanna” and the music video for “sage.” In the dance cover, the boys give a powerful interpretation of La Rosalía’s hit with precise movements and bold facial interactions with the camera. If you pay close attention, you can see the members singing along to the lyrics, displaying their love for the song.

Also found in the description, OnlyOneOf sought to highlight their artistic vision of this cover by interpreting “the choreography and expression of Rosalía’s own beyond gender,” giving this performance the admiration and appreciation it deserves from their fans’ comments. One thing’s for certain, we’re definitely manifesting a future collaboration between these two.

In a recent upload from MLD Entertainment’s YouTube channel, the on-the-rise boy group T1419 expresses their admiration for the reggaeton king Daddy Yankee in a dance cover for “Problema.” The boys begin the video with sincere words of love and appreciation of Yankee’s music, adding that they themselves are fans of his music, before performing their own dance choreography for the song. The choreography shown throughout the video will take your breath away and in shock of the sheer raw talent and technique the boys of T1419 give off in this cover alone. You can tell by their passionate expressions and powerful stamina through such fast-paced choreography that these boys gave it their all. Admittedly, it’s a dance cover that’s unforgettable and will leave you watching it on repeat., We hope Daddy Yankee notices T1419’s incredibly addictive and precise dance cover.

In this dance cover released before AleXa’s solo debut featuring her choreographer TinaMirae, we see a powerful and energetic take on Brazilian artists MC Gustta and MC DG’s single, “Abusadamente.” With the advanced and strong dance skills that AleXa has shown throughout her career, this choreography is definitely not for inexperienced or beginner-level dancers. With high jumps, deep drops, precision, and confidence in their dance abilities, AleXa, and her choreographer shine together in a short but exciting dance cover. Hopefully, she teams up with TinaMirae again to perform more challenging dance choreographies for Latine tracks.

For the 2019 SBS Music Awards in South Korea, solo artist Chung Ha and MAMAMOO’s HWASA collaborated together on-stage for an unforgettable dance cover performance of J Balvin‘s popular track, “Mi Gente.” Showcasing their respective charms and aura through their stage presence made the crowd go wild. The singers’ on-stage chemistry together was undeniable—their interactions were vivacious and full of spirit, showing that both ladies are enjoying the fun choreography. Even though fans took to the comments to wish the choreography showcased more of their dancing skills, there’s no doubt that the girls enjoyed themselves regardless. Even after their performance, fans are now hoping to see more female artists in the K-pop world team up together for dance collaborations of notable Latine songs.

Earlier this year, Chung Ha worked with Guaynaa for “Demente,” off her album Querencia, and even sang in Spanish.