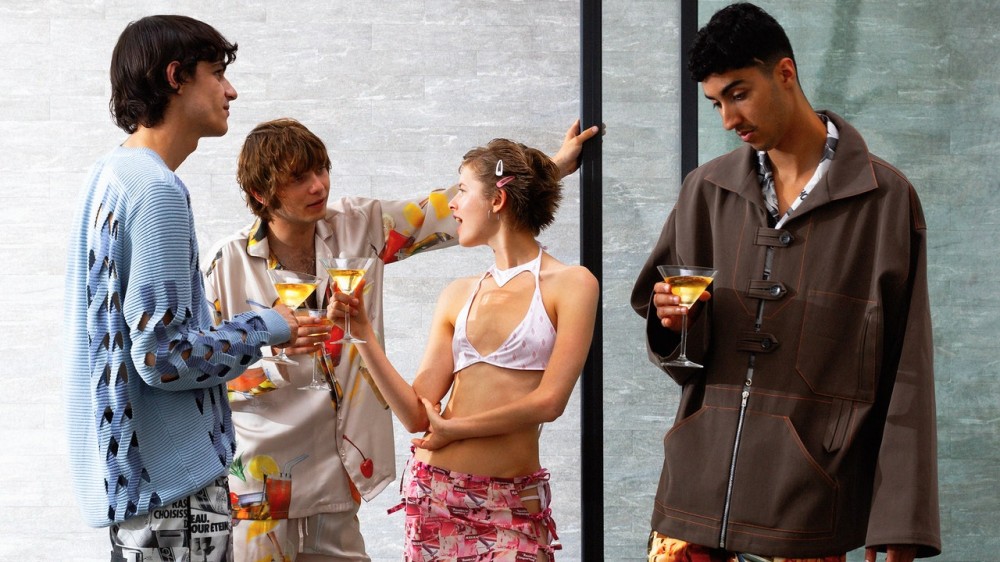 Even with a continued mix of physical and digital runway shows at Men’s Fashion Weeks in Europe, there were plenty of emerging designers on the schedule. Some are COVID-born, the result of months spent in isolation wondering about clothes. Others are just hitting their stride after years in the business. Here, Vogue Runway breaks down the six brands that caught our attention after a month of non-stop menswear.

Supported by Dover Street Market Paris, the store’s incubator arm, Youths in Balaclava is a collective of Singaporean designers who challenge and defy their country’s status quo. Their garments have a rebellious streak, with past collections bridging the ideas of subversive counter culture and military uniform—Singapore has a mandatory 2-year military service requirement, which all 13 of the brand’s members have completed. The designers gave Vogue Runway an exclusive preview of their spring 2022 collection, titled “Ace of Spades” after Motörhead’s fourth studio album. The collection features their Y-shaped yokes and embossed logos while introducing a new suit silhouette sure to become a mainstay of future YIB collections. *—*Steff Yotka

In January 2020, Phil Oh spotted a particularly eye-catching octogenarian couple at the Paris men’s shows. They were each dressed in head-to-toe leather—his spiked, hers painted with pink roses. Needless to say, they stood out in the crowd of editors and models, and Oh’s photo became one of @voguerunway’s most-liked Instagram posts of the year. Everyone wanted to know: Who were those stylish 80-somethings? And what were they wearing?

I got the answers unexpectedly in an Instagram DM: Kévin Nompeix and Florentin Glémarec, the designers behind Egon Lab, reached out to ask if Vogue Runway could kindly tag the brand in our Instagram post. As it turned out, the man and woman were Glémarec’s grandparents; he proudly called them “brand ambassadors.”

That’s just one of the ways he and Nompeix are challenging conventions at Egon Lab. They’re committed to “defending all points of view” and hope too see their clothes on people of all ages, all bodies, and all genders. For spring 2022, they cited the “early activist” Lady Godiva as an inspiration and pointed out touches of medieval decoration: scalloped “breastplate” collars, heavy charm-laden chain belts, and tapestry coats woven with Byzantine figures. The chains and lace collars represented a new project, Heritage, wherein Nompeix and Glémarec collaborate with French artisans; that lace was handmade guipure, and the chains were fashioned by a local blacksmith. As the duo put it, Egon Lab is “creating a bridge between past and future, craftsmanship and innovation.” *—*Emily Farra

A graduate of the Antwerp Royal Academy of Fine Arts, Jan-Jan Van Essche, is new to the Paris men’s lineup, but not to fashion. As the pandemic has reset our clocks, his preoccupation with time—or more accurately timelessness—is resonant. He combines a cool Northern vibe with Japanese influences to create a hybrid aesthetic with an emphasis on texture. For spring he pairs a flaming red caftan with jeans and makes Carhartt-like work jackets in denim. His super-sized drawstring windbreaker with matching pants is a chic alternative to a tracksuit. *—*Laird Borrelli-Persson

At 15, Pierre Kaczmarek helped launch the popular French brand Afterhomework in Paris, gaining an ANDAM nomination and a bevy of fashion followers. Now 22, he’s taking on a new project with an old story: He is reinvigorating the label Georges Wendell, a legendary tailor in Le Sentier, Switzerland. Launched during the pandemic, the Georges Wendell brand has already dropped a couple capsules with Ssense, and released a first full collection at Paris Fashion Week. Inspired by the dog days of August, when the French clear out and the streets of Paris are lined with tourists and unlucky office workers, Kaczmarek is reimagining deconstructed suits, skirts, shorts, and strappy tops for salty summer weather. The fullness of his vision makes this brand re-boot one to watch. *—*S.Y.

Sunflower, a Danish brand that operates on a collective model, was founded by Ulrik Pedersen a few years ago. Inspired by the idea of a flash mob, the seventh collection was presented as a sort of pop-up show during lunch hour in a park in Copenhagen. It’s a format that complements the brand’s approach to menswear, which focuses on everyday clothes in luxe and/or responsible materials. Adding a special touch to the spring offering were jeweled cowboy boots that work for midday and midnight cowboys alike. *—*L.B.P.

Takuya Morikawa spent eight years at Issey Miyake and brings a similar focus on textiles and surface detail to his own label, Taakk. Since launching in 2013, he’s become known for his lean, flowing proportions, from pajama-like tailoring to elegant jumpsuits that appeal to people of all gender identities. He’s played with sheerness and cut-outs in recent seasons, and his signature dip-dyed jackets and shirts manage to feel vaguely futuristic, not hippie-ish.

For spring 2022, Morikawa said he wanted to imagine what “a collaboration with Earth” might look like, and the results were both hyper-natural and vaguely surreal. Open-knit crochet items brought a softer, craftier touch to his usual shapes, while lustrous satin jackets were printed with new, otherworldly landscapes and blurred florals. You’ll have to zoom in to fully appreciate the fabric, but we’re looking forward to seeing Morikawa’s next experiments IRL on the runway next season. — E.F.