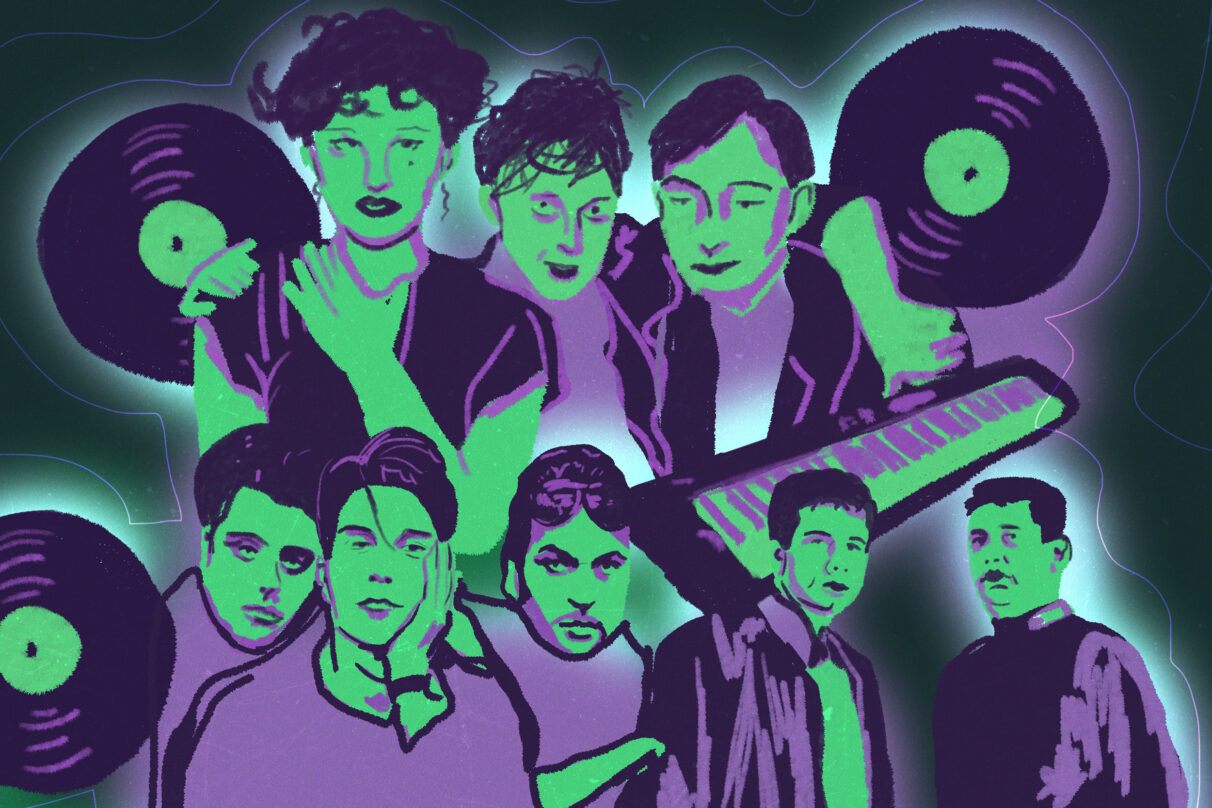 From ambient to hard techno, and everything in between, Mexico currently has one of the healthiest electronic music scenes in the world. Whether they adhere to the strict rules of subgenres or bend them to their will by adding folk and regional sounds into the mix, Mexico has been providing amazing electronic music to the world.

And as it turns out, the roots of this utopia are just as fascinating. Electronic music in Mexico started in the 1960s with composers like Mario Lavista, Francisco Nuñez, Héctor Quintanar, and Julio Estrada. By 1970, Quintanar helped open the first electronic music laboratory in Mexico City at the National Conservatory. Just a few years later, pioneering progressive rock bands emerging post the historic Festival Rock y Ruedas de Avándaro, like Vía Lactea, Como México No Hay Dos, Chac Mool, and Decibel, incorporated early commercial synthesizers into their music as influenced by German bands like Tangerine Dream, Klaus Schulze, and Popol Vuh. This led up to a booming period in the next decade, with many of the people involved in the aforementioned projects being responsible for innovation in the genre.

Indeed, a golden era of electronic music started in the ‘80s, not only giving us amazing music but helping establish the scene that eventually led to the rock mexicano explosion of the ‘90s and beyond. Although its impact is incalculable, the music itself faded into obscurity as the albums went out of print. In 2005, AT-AT Records put out an archival compilation titled Backup: Expediente Tecno Pop featuring some highlights of the era in an effort to preserve them. Earlier in 2021, San Francisco label Dark Entries reissued the material with a different tracklist but maintaining the same spirit as the original compilation, this time under the name Back Up: Mexican Tecno Pop 1980-1989.

As with most compilations, Back Up is an excellent introduction to a time and genre—yet, there’s more to the story. In order to celebrate the release of the album, and to revisit the history of an important era for electronic music in Mexico, we gathered six artists worth exploring—three of which were featured in the current edition of Back Up.

Considered by many to be the first Mexican punk band in history, Size embodied said reputation with highly original music and a defiant attitude to match. Size was formed by Jaime Keller after encountering punk while spending his adolescence studying abroad in the late ‘70s. Reinventing himself as Illy Bleeding, he retained a taste for glam rock’s theatrics and androgynous looks. He then met Walter Schmidt and Carlos Robledo, two former members of the seminal prog-rock band Decibel—one of the premiere experimental rock bands of the country who were among the first to incorporate electronics into their lineup. Soon they developed a signature sound that was both fun and menacing in equal amounts with lots of helping from synths. Their music matched their stage show which was confrontational, hilarious, and unapologetically queer.

Size made their name playing gay bars around Mexico City where their ripped jeans/bondage gear/makeup look felt like second nature—singer Illy Bleeding often shouting abuse at the audience and giving a show worth remembering. They released a handful of singles during their lifespan and miraculously landed a deal on a major label at a time when rock music had been pushed to the fringes by mainstream society, resulting in experimental yet playful songs like “El Diablo En El Cuerpo,” “Alebrije,” and “Tráfico de Esclavos.” However, they broke up before they could finish an album. In the following years, most of the former band members continued making music even if Size fell to obscurity, eventually becoming the subject of a documentary and a reissue campaign of their recordings. Sadly, Illy Bleeding died in 2010.

One of the hardest bands of the ‘80s, Década 2 plunged straight into a dark yet ironic and iconoclastic sound that became one of the longest-running projects in Mexican electronic history. Before Década 2 there was María Bonita, a project formed by brothers Mateo and Mario Lafontaine that mixed electronic music with vaudeville humor, drag queen aesthetics, cabaret showmanship, and transgressive expression, making their mark at the same LGBTQ+ spaces Size was playing at the time. After María Bonita, Mateo started Década 2 with Carlos García, another electronic musician who had already made his mark in the scene with the band Silueta Pálida, a short-lived outfit of the fledging scene that released a mini-album in their lifetime—which is also represented in Back Up.

Década 2 took their inspiration from such diverse sources as Joy Division, early industrial, Electronic Body Music, and Soviet visuals, along with sociopolitical commentary and dystopian narratives with a subtle sense of humor. They made physically imposing beats with distorted synth melodies and subwoofer-rattling bass. The band remained loyal to the underground, becoming favorites among goths, punks, and other subcultures. Fuelled by Lafontaine’s ever-growing collection of vintage electronic instruments, the band built a formidable discography that lasted well into the next millennium. Década 2 remained active through changes, most notably the absence of García in their last few years. However, the band seized operations after the death of Mateo Lafontaine in 2020, leaving behind a legacy that will take decades for fans to unravel.

After Size broke up, Walter Schmidt and Carlos Robledo soon found a new outlet for their artistic expression and were lucky enough to find the right collaborator, helping them hone their songwriting skills resulting in some of the most memorable music of this era. The origin of Casino Shanghai goes back to an impromptu gig where three of the Size members invited Ulalume Zavala—a scenester at El 9 bar—to sing as a one-off. The gig turned out so good it immediately became a full-time band. Casino Shanghai focused on pop melodies and traditional song structures, from the dancefloor-ready “Hollow Bodies” to the moody “Switch On The Lights” to the somber “Le Tombeau de E.A. Poe”—the latter featured in the original Back Up compilation.

Halfway between the slickness of ‘80s pop and the darkness of goth, Casino Shanghai cultivated its own aura, inspired in part by the glamour and decadence of 1940s Hollywood, as the cover art of their sole album, 1985’s Film, attests. Perhaps the electronic band most likely to crossover to mainstream success, audiences were not ready for Casino Shanghai. After breaking up, Ulalume moved to New York to become a DJ while Schmidt and Robledo dabbled in side projects until they resurrected Decibel in the 2010s, incorporating Alex Eisenring (Escuadrón del Ritmo/Syntoma) and Carlos Vivanco to their ranks. The Casino Shanghai legend grew throughout the years resulting in a reunion in support of the reissue of Film in 2012.

The Mexican electronic music underground was—and remains—populated by larger-than-life figures that transcended listeners’ imagination. One can argue that none were larger than the mighty Capitán Pijama, one of the genre’s indisputable pioneers and biggest champions. Born Jesús Bojalil, El Capi got his start with the formation of Como México No Hay Dos in 1974, a progressive rock band pushing into the future by incorporating synths into their arsenal of sounds, making it one of the first electronic bands in the Mexican underground—with Década 2’s Mateo Lafontaine often claiming that El Capi sold him his first synth. After CMNHD broke up, Bojalil formed the more straightforward Pijamas A Go-Go before hooking up with Alex Eisenring from fellow prog pioneers El Queso Sagrado to start El Escuadrón Del Ritmo in 1982, a project very much influenced by early electronic outfits like Kraftwerk, Fad Gadget, and The Normal.

Never releasing a full-length album, Escuadrón del Ritmo would have been a footnote in the history of the genre if not for “Las Cucarachas,” a hyperactive track that featured layers of synths and frantic vocals. After the dissolution of Escuadrón del Ritmo, Bojalil continued releasing solo music, reuniting with his past projects and founding new ones like Groovy People and The Love Freaks, all featuring his zany and humoristic worldview that became incredibly influential on ‘90s mainstream Mexican rock. Sadly, he passed away in 2014. For his part, Eisenring formed Syntoma—a synthpop outfit also featured in Back Up—before joining Schmidt and Robledo in a reunited Decibel as well as starting his own band Bardo Thodol.

Along with Mexico City, Tijuana is perhaps the biggest contributor of electronic music acts in the country, and Artefacto constitutes a solid entry into the seminal artists to establish the scene in Mexico. One of the first acts to fully immerse themselves in the electronic underworld and rave culture, Artefacto incorporated emerging trends like techno and house as well as industrial and experimental music, making them one of the most innovative and exciting projects to emerge in the latter half of the 1980s.

Formed in 1985 by Roberto Mendoza, Melo Ruiz, and Bola Melovedesky, Artefacto quickly became one of Tijuana’s bands to watch, making a mark in venues both legal and illegal. This lineup released only one album together, 1988’s Synthesis, a collection of tracks that blended samples, state-of-the-art synths, and unadorned vocals for a sound that could have come out yesterday, as heard on the dystopian “Mundo Sin Viento.” While Synthesis is significant for the reasons already stated, the band’s history didn’t stop there. Melovedesky left after the album’s release and was replaced by Pepe Mogt. Changing their name to Artefakto, the band hardened their sound and became more active in the ‘90s, releasing three albums on the cult Opción Sónica label. However, their biggest cultural impact came after their breakup when Mendoza and Mogt started solo projects—Panoptica and Fussible, respectively—which became the founding pillars of Nortec Collective, a gathering of artists aiming to fuse electronics with regional Mexican music, becoming one of the most internationally successful and enduring electronic projects Mexico has ever produced.

Being one of the most inventive, aggressive, and longest-running projects in the Mexican electronic scene, it seems like a major oversight that Ford Proco is not present in any edition of Back Up. However, one only need to take a closer look to notice that the original compilation was released by their own label, AT-AT. Having said this, Ford Proco’s contributions to the early electronic scene in Mexico go beyond their roles as archivists, and listeners should be encouraged to seek out their work. Founded in Tijuana in 1987, Ford Proco was formed by Roberto De la Torre and Lauro Saavedra, the latter eventually taking the stage name Wito Lavolt. Shortly after their formation, De La Torre was replaced by Roberto Castañeda, and ever since, Ford Proco has revolved around the core duo with many other musicians joining on occasion for recordings and live presentations.

Their industrial-influenced music was originally put out on a series of cassettes before formally debuting with the album Fragmentos De Ocio En El Hocico Del Cerdo in 1993 and have since put out a number of releases, most of them in their own imprint. Largely inspired by the work of British noise occultists Coil, Ford Proco specializes in abstract and noisy excursions that lend themselves to different explorations in styles. In fact, they released a collaboration with Coil called Expansión Naranja. Fun fact: Both members of Ford Proco can be seen in the video for “Born Dead” by Ice T’s Body Count project.