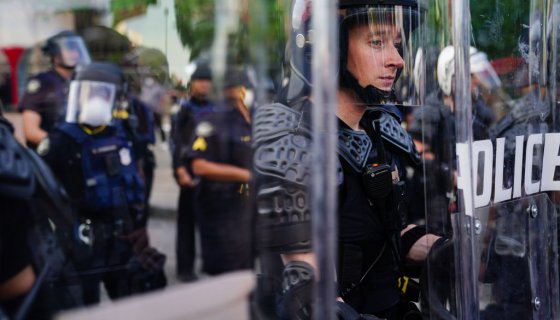 Six police officers are facing charges after reportedly pulling two college students from their car and using excessive force after pulling them over during the protests while they were stuck in traffic.

On Tuesday (June 2), during a press conference, the Fulton County District Attorney Paul Howard announced the charges against the officers after video footage from the traffic stop went viral showing the officers pulling 22-year-old Messiah Young and his girlfriend 20-year-old Taniyah Pilgrim from a stopped vehicle before using a stun gun on the two students who were pleading that they were “just trying to get home.”

Arrest warrants have been issued for Lonnie Hood, Willie Sauls, Ivory Streeter, Mark Gardner, Armond Jones, and Roland Claud. Some of the charges against the officers include aggravated assault of Messiah Young, aggravated assault of Taniyah Pilgrim, simple battery and criminal damage to property, Howard said.

In addition, Howard also noted that he has asked a judge to set a signature bond of $10,000 for the officers, allowing the officers to make bond without upfront payment unless they fail to show up for court dates, due to the state’s decision to limit the number of people in the Fulton County jail during the coronavirus pandemic and because they are police officers; adding that the officers have until Friday to turn themselves in.

“I feel a little safer now that these monsters are off the street and no longer able to terrorize anyone else,” said Messiah Young, who was dragged from the vehicle along with his girlfriend, Taniyah Pilgrim.

The incident, which happened on Saturday (May 30) in downtown Atlanta, first gained attention after video footage from the violent arrest was posted online and on local news. Throughout, the couple can be heard screaming and asking officers what is happening, before being yanked from the vehicle.

Atlanta said Pilgrim was released without charges, adding that Young, was released, too, and she’s ordering the unspecified charges against him to be dropped. In addition, two of the six officers, Streeter and Gardner,.

Check out the officer’s body cam video from the incident below.