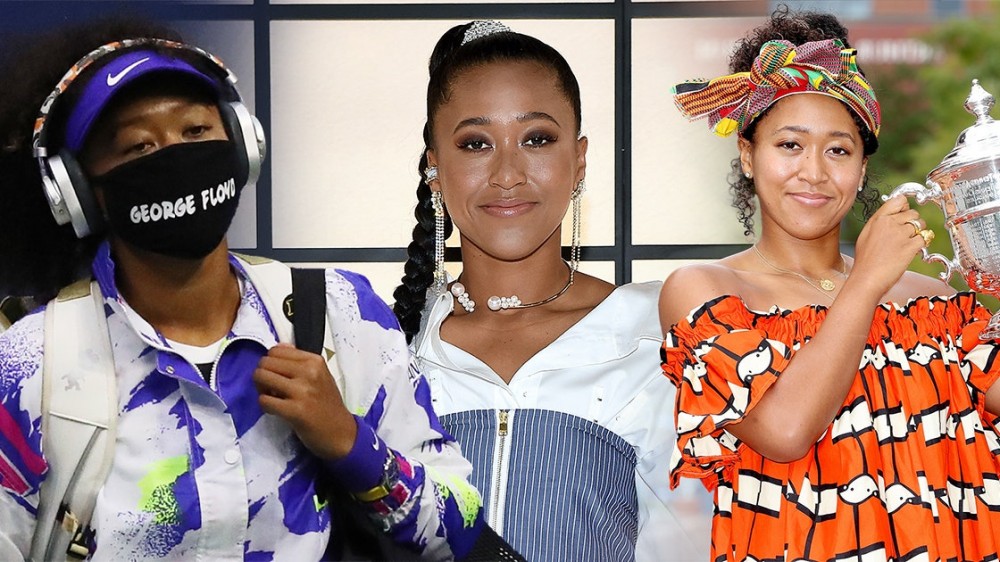 On the cover of Vogue’s January issue, Naomi Osaka stands tall in a billowing Louis Vuitton dress against a moody backdrop of blue sky and clouds. She is the second tennis player to appear on the magazine’s cover in its 128-year history—the first being Serena Williams, Osaka’s friend and regular opponent, who Osaka memorably played against in the riveting final of the 2018 U.S. Open that catapulted her to global stardom. As such, her story serves as a snapshot of a groundbreaking athlete with the world at her feet.

This isn’t the only way in which Osaka has blazed a trail within the world of tennis, however. As a fashion obsessive and an outspoken supporter of multiple social justice movements, Osaka has skillfully reconciled her two interests like nobody before her. And nowhere is her approach to activism more powerful than in her ability to use style as a tool to celebrate her heritage and communicate her political beliefs, both on and off the court.

Here, we look back at five of Osaka’s most agenda-setting fashion moments—and how she continues to use her platform as a world-famous athlete to spotlight the cultures and causes closest to her heart. All hail tennis’s reigning style champ.

After her spectacular victory over Serena Williams at the U.S. Open final in 2018, all eyes were on Osaka as she arrived for the photocall with her hard-earned trophy—in no small part due to her emotional response to beating Williams, a player she had already cited as her hero, and who had comforted her through tears of disbelief while on the podium earlier that day.

For the life-changing occasion of her first Grand Slam win, however, Osaka chose an outfit that would mark her out instantly as a style star on the up. The white shift dress with embellished sleeves not only carried Osaka’s signature take on easy, effortless chic, but was also an initial nod to what is now a running theme in her fashion choices: using clothes to honor her heritage.

Designed by Rei Kawakubo of Comme des Garçons, the dress was a perfectly-timed nod to her mother’s home city of Tokyo. “I remember when I was little when we would play tournaments in Tokyo, and every time we would go to Harajuku or Ginza or Shibuya,” Osaka told Vogue earlier this year. “It was so cool to walk around and see everyone in so many different outfits that you wouldn’t necessarily see in America.” With her head-to-toe Comme look, Osaka proved that she was a new—and incomparably stylish—kind of American athlete.

Collaborating with ADEAM at New York Fashion Week in 2020

Unsurprisingly, we weren’t the only ones to take notice of Osaka’s bold take on fashion. At New York Fashion Week this February, Osaka debuted her first capsule collection with ADEAM, the Japanese label launched by designer Hanako Maeda. Co-designed with Maeda as a tribute to the elements of Japanese style Osaka loves most—blending “traditional and modern Japanese elements” with classic origami-like draping and more contemporary “kawaii”-style ruffles, as Vogue’s Brooke Bobb described the collection earlier this year—it marked the beginning of Osaka’s nascent second career as a design talent.

“Each piece is like its own little work of art,” she told reporters backstage after the show. With its playful ode to the codes of Japanese fashion Osaka loves most, her first fashion collab existed not just as a “work of art,” in her words, but yet another impressive chapter in her ongoing style journey.

That this year’s U.S. Open was able to go ahead at all is testament to the herculean efforts of its organizers to ensure it could be conducted safely and with the necessary social distancing measures in place. For Osaka, the visibility afforded by her platform as one of the most scrutinized players in the race wasn’t just about achieving her eventual victory over the Japanese player Misaki Doi, but an opportunity to honor the victims of police brutality that spurred the renewal of energy behind the Black Lives Matter movement taking place at the same time as the tournament.

As becomes clear in her interview with Rob Haskell for this month’s Vogue cover, what might first appear as shyness reveals itself as instead a firm single-mindedness, and an intense focus on the issues that matter most to her. There are few causes she has championed as vocally and consistently as Black Lives Matter—no more so than when she showed up for her matches at the U.S. Open this year wearing a series of face masks honoring the likes of George Floyd, Breonna Taylor, Ahmaud Arbery, and many more.

“I’m aware that tennis is watched all over the world, and maybe there is someone that doesn’t know Breonna Taylor’s story,” Osaka told reporters after the match via video conference. “Maybe they’ll Google it or something. For me, [it’s] just spreading awareness. I feel like the more people know the story, then the more interesting or interested they’ll become in it.” Osaka also noted that she had brought a mask for every round with her to see the tournament through. “It’s quite sad that seven masks isn’t enough for the amount of names,” she said after her first match. “Hopefully, I’ll get to the finals and you can see all of them.”

The Kente head wrap Osaka wore to collect her trophy at the U.S. Open 2020

Thankfully, Osaka didn’t just get to the finals at this year’s U.S. Open, she swept to victory—and her outfit while receiving the grand prize was equally noteworthy. In the wake of her decisive win, Osaka chose to wear a look that was both celebratory and intentional.

Sporting a traditional headwrap made from Ghanaian kente cloth while holding up her trophy, Osaka paid tribute to the Haitian side of her family, where similar West African styles are used to mark significant or sentimental moments in their wearers’ lives. It also served—quite literally, in this case—as the feather in the cap of Osaka’s electrifying fortnight at the U.S. Open. In the words of Osaka herself, that she shared to Instagram after the dust settled: “You already know I had to bring out the headwrap for this one.”

The Pyer Moss look Osaka wore to shut down Instagram

While many of Osaka’s looks carry a subliminal political message, her love of clothing is first and foremost about turning a look. So where better to turn to than Kerby Jean-Raymond’s Pyer Moss, whose colorful, celebratory designs pay tribute to the rich heritage of Black design that Osaka is equally fascinated by?

Last month, Osaka took to Instagram to share her latest fit. A dress from Pyer Moss’s spring 2020 collection, its rich yellow serves as a backdrop for a painting of a jazz musician by artist Richard Phillips, brought to life through the vibrant, rippling accordion pleats of the skirt. Captioning the post with a Haitian flag, Osaka made a subtle nod to her shared heritage with Jean-Raymond, who is himself Haitian-American.

But the most exciting element of the look is simply that the dress, in all of its kaleidoscopic color and playful pleating, is simply a joy to wear—and if anybody knows how to have fun with style, you can be sure it’s Osaka.