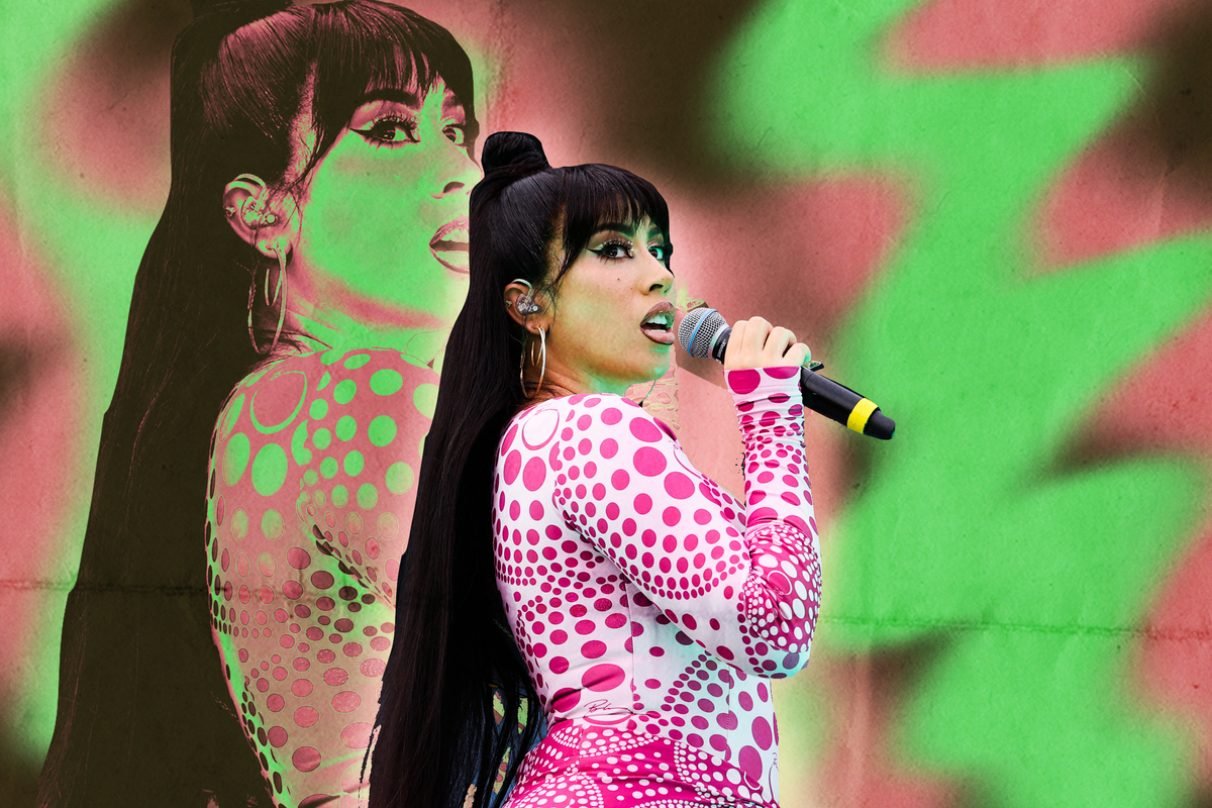 In a sea of reggaetón music, Kali Uchis broke through this year by embracing her R&B sound with “Telepatía.” She sang the track in Spanglish, which represented her well as a bicultural artist, and it also allowed the song to be embraced by the world.

In the alternative music scene, the singer made a name for herself by spending the past decade performing at major music festivals like Outside Lands in San Francisco, Austin City Limits, and Coachella. After dominating that space, the Colombian-American artist decided to embrace her Latina roots with last year’s Sin Miedo (Del Amor y Otros Demonios). As she noted in a past interview, her record contract originally only allowed for English language albums, so she had to fight to release her first Spanish LP.

Though never intended to be a single, Uchis’ alluring “Telepatía” took off on TikTok earlier this year. The viral moment the song had translated into a global success. The singer became the first female artist in a decade to top Billboard‘s Hot Latin Songs chart without a feature. But “Telepatía” didn’t just make noise in the Latin market, the song also impressively peaked at No. 25 on the all-genre Hot 100 chart.

Now, to celebrate Latine Heritage Month, Spotify is releasing special covers of this year’s biggest Latin hits — including “Telepatía,” of course. However, many artists have been enraptured by the aura of the now-classic hit and done their own covers. Here are five of our favorites.

For Latine Heritage Month, Spotify is releasing special singles by rising Latin stars, who are covering the year’s biggest hits. As a B-side to Black Paw Edit of his hit “Alemania,” Twin Shadow covered “Telepatía.” The Dominican-American singer gives the song more of a bluesy edge with his guitar.

“When covering Kali Uchis’ ‘Telepatía,’ I set out to reinterpret the song as if it was on my most recent record,” Twin Shadow says in a statement. “The first step was to figure out the chords which misled me at first, they were more nuanced than I thought, and it led me to a great foundation to build the rest of my version.”

Denali Foxx, who went by simply Denali on this year’s season of RuPaul’s Drag Race, covered “Telepatía” outside of the show. While competing on Drag Race, the self-proclaimed “Latina Que Patina” represented her Mexican roots well in her runway looks. After her premature elimination on the show, Denali treated her fans to a special lip-sync music video of “Telepatía.” Denali is stunning as she breathes new life into the song. Kali Uchis is openly bisexual, so her song was a hit with the LGBTQ+ community. “Have had this song on repeat since it came out and it’s such an honor to promote for more queer Latinx queens,” Denali wrote about her cover on YouTube.

K-pop star Ashley Choi covering “Telepatía” is the perfect example of showing the song’s global reach. Choi is most known as a member of the group Ladies’ Code, which is on an indefinite hiatus since the members left their label in February 2020 after their contracts expired. Choi and her bandmates are now pursuing solo careers. Among Choi’s lifestyle videos on YouTube channel is her cover of “Telepatía.” The Korean-American chanteuse from New York sounds incredible singing in Spanish. “If the original version is the spicy version, this is the mild version,” she wrote on YouTube. “And sorry my pronunciation is off. I really tried, but it’s so fast.” No worries, Ashley. You killed it!

Rising pop star Sabrina Carpenter tackled “Telepatía” on TikTok where the song first went viral. Carpenter is most known for her time on Disney Channel, starring in many shows, including the Boy Meets World reboot Girl Meets World. In 2014, she signed her first record contract with Disney’s Hollywood Records. Carpenter took a more serious approach to music this year by leaving Hollywood Records and signing with Island Records. In February, she uploaded a short cover of “Telepatía.” She sounds amazing singing in Spanish. Her pronunciation is a lot better than when she was asked during a radio interview in 2019 to cover “Despacito” on the spot.

Like Carpenter, Mexican pop princess Danna Paola also covered “Telepatía” on TikTok. She rose to prominence in Mexico in children’s telenovelas like Amy, La Niña de la Mochila Azul. Paola experienced a global breakthrough starring in the first three seasons of Netflix’s Élite as resident bad girl Lucrecia “Lu” Montesinos. After extending her contract with Universal Music Group last year, Paola is focused on her music career. Her last album K.O. reached the top 10 of Billboard’s Latin Pop Albums chart. In a homage to another rising Latina artist, Paola belted out an acoustic version of  “Telepatía.” Her brief cover is a simple yet beautiful take on the song.