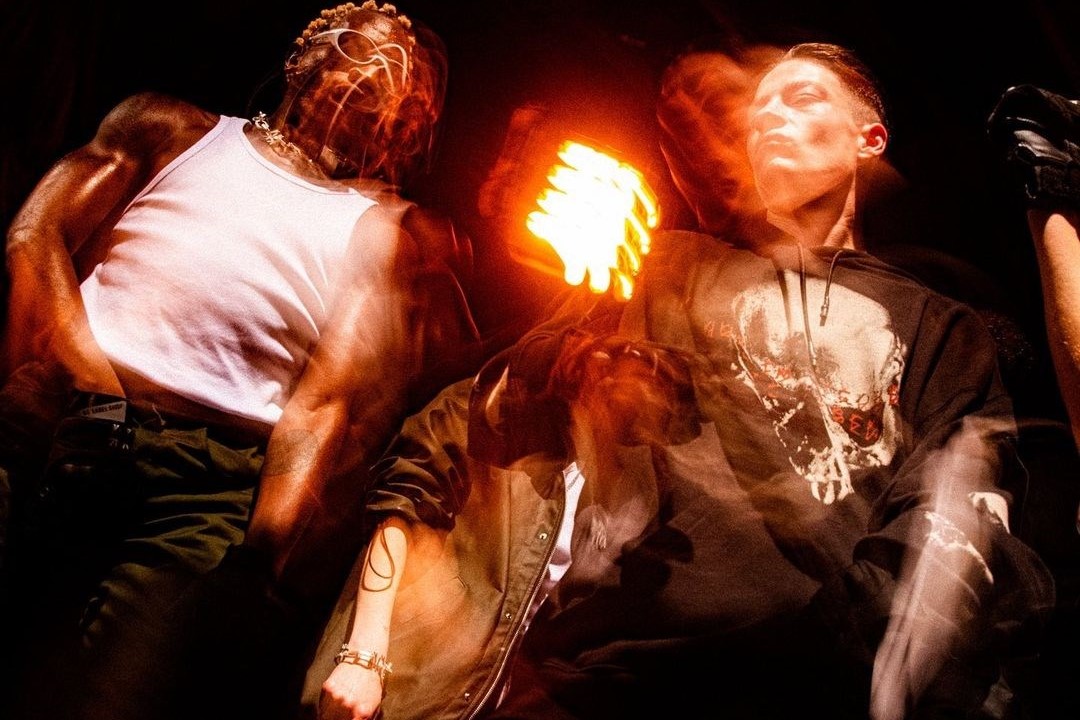 The 30-year-old is a fixture of the Berlin underground scene. A former Berghain resident, Kobosil’s techno is dark, fast, and aggressive. It pummels your brain with gritty analogue bass and searing kickdrums and leaves you wanting more.

After years of highly-coveted merch drops on his record label – each selling out faster than the next – Kobosil launched his official fashion brand 44 LABEL GROUP earlier this year. Named after the postcode for the Neukölln borough where Kobosil was born and raised, the collection spans everything from outerwear to hoodies, t-shirts to trousers, and accessories. With the tagline “Every dark night has a bright end”, the label is effortlessly edgy, inspired by Berlin club culture and the people who shape it.

For his SS22 collection, the designer joins forces with visionary director Matt Lambert, to present a new short film which further expands on the brand’s ethos. Described as an “ode to Berlin’s infamous hedonism”, the film captures the sense of freedom and endless euphoria of the city’s nightlife. Think: Sweaty bodies in blacked-out basements raves.

Below, we speak to Kobosil about his earliest clubbing memories, Berlin nightlife, and the new collection.

What are some of your earliest memories of clubbing?

Max Kobosil: I was 14 and wanted to enter a club but I was refused because I was too young.

What’s your favourite memory of DJing?

Max Kobosil: There are too many good memories to just reduce it into one specific place or situation. But one special moment was when I played at a big festival with over 10,000 people for the first time. It was unreal to me that so many people were listening to my music. That occasion was also very meaningful to me because I brought my mother and we both couldn’t believe where I had arrived after all those years annoying her with my bedroom DJ gigs when I was a teenager.

Also worth mentioning are my first intercontinental gigs in South and North America, Asia, and Australia. It showed me that hard work and to never stop dreaming can take you everywhere.

Max Kobosil: The big kick drums hitting hard on big sound systems is what gives you the fundamental feeling of techno. The togetherness and unity on the floor that is built for said kick drums and dancing to the same rhythm.

How did the idea for the label come about?

Max Kobosil: It started through selling merchandise for my record label. The 44 motif and the decision to use it was the game changer. It’s the old Berlin postcode for the area where I was born and grew up. A lot of my childhood friends can relate to this because it was neither only about techno nor me or my label.

After we launched the first drop, which sold out immediately, we increased the number of t-shirts every year – but luckily managed to sell out fast. Sometimes too fast. For one drop it only took eight minutes to sell the entire shop. After our last drop in 2020, where we thought we produced so much that we would be stocked for the rest of the year, it took 15 minutes to sell out. It took us five to six weeks to send out everything. Thousands of orders. It was insane. Right there and then we knew we needed professional distribution.

The group’s mantra is ‘every dark night has a bright end’, what do you mean by that?

Max Kobosil: It’s a positive meaning and the core motto of my life. I was going through some private difficulties when I thought of this and immediately could relate to it. Darkness and light belong together and will always be present. We just have to remind ourselves of that.

What about techno and club culture inspired the collection?

Max Kobosil: Club culture and nightlife was my first love and real passion. I never knew or learned anything else than that before starting with fashion. Traveling for shows all over the world and experiencing so many influences is a never ending source of inspiration I bring into my work as creative director.

How does that translate to the garments?

Max Kobosil: The functional shapes, the roughness, and gender fluid approach already shows the influence I experienced in techno culture. It’s our first collection and we’ve just started the journey. There is so much more to communicate and I can’t wait to share my ideas and vision.

How would you describe the relationship between techno and fashion?

Max Kobosil: Many trends were born in the nightlife of the electronic music scene. People are dressing up for the night and expressing themselves even if it’s just a chain from the hardware store.

What made you choose to collaborate with Matt Lambert?

Max Kobosil: Matt is a true artist and a legend in the scene. I luckily got introduced to him by my friend Marc Göhring, and asked him if he would be up for it. I think no director can visualise club culture quite like him. You can feel he has a lot of experience when you see his work.

How important is collaboration to you generally?

Max Kobosil: Super important, I would love to collaborate more with the right partners. I believe it makes a project more interesting when worlds clash together.

Where do you see the brand going moving forward?

Max Kobosil: If you told me one year ago I would be here sitting and talking to Dazed Fashion I wouldn’t believe it. So who knows where we will be one year from now.

Watch the SS22 video above.