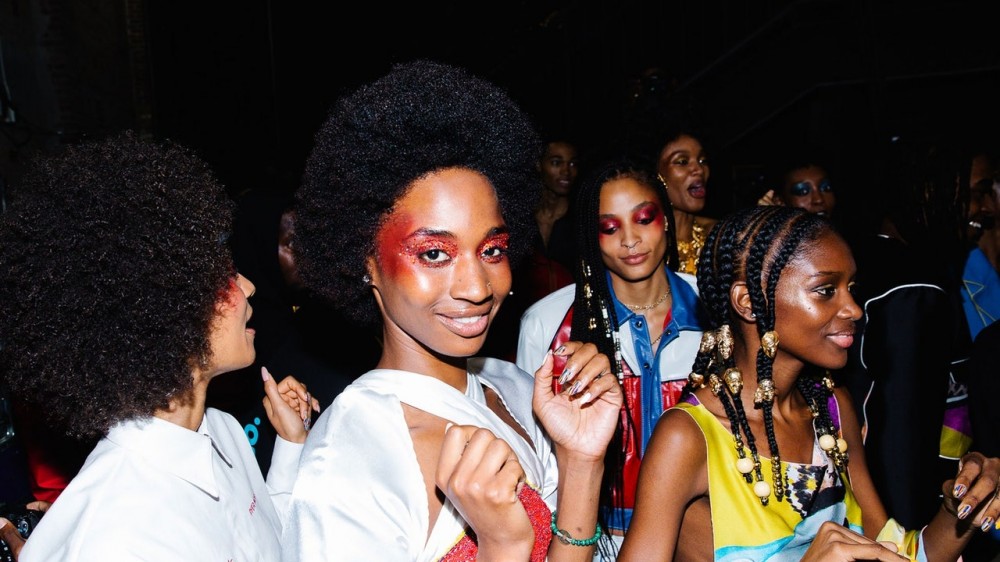 Over the past few years, vital conversations have been brewing around diversity and inclusion in the fashion industry—but are words turning into actions that will bring about permanent change?

Behind the lens, the likes of Teen Vogue editor in chief Lindsay Peoples Wagner and PR guru Sandrine Charles are making strides with the Black in Fashion Council, which partners with fashion companies such as Condé Nast, Ralph Lauren, and Tommy Hilfiger to hold them accountable for putting an end to systemic racism in the industry.

Meanwhile, on the runway, racial diversity has improved, with 41.3% of castings for spring 2021 going to models of color, according to The Fashion Spot’s diversity report, up from a meagre 17% in 2015. Progress over the years hasn’t been on a consistent upwards gradient, though, and age, size, and gender representation all took a downward slide this season.

This fluctuation over time, and the dearth of intersectionality in the fashion and beauty industry, was articulated by the models Aaron Philip and Chella Man in a recent Vogue interview. “I feel parts of myself represented,” the latter explained. “Typically, I have to categorize the representation I am looking for. If it is queer, I will go one place. Deaf? Another.” Both Man and Philip have had successful careers, starring in campaigns for Calvin Klein and Moschino, respectively, but, as they say, the industry isn’t doing enough to uplift the voices of BIPOC, disabled, and LGBTQ+ people.

The responsibility of creating a fashion industry that accurately mirrors society falls on everyone working in it, and as the people who present the models to walk in designers’ shows and star in campaigns and magazine shoots, casting directors play a crucial role. Here, four who are helping lead the charge in diverse and inclusive casting through their work with Pyer Moss, Marine Serre, Chromat, and GmbH, among other brands, share the stories behind their processes, the challenges they’ve faced, and how they hope it will evolve from here.

In 2011, Affa Osman relocated from Switzerland to Berlin to take up an internship with a modeling agency. “My parents came to Europe from Ethiopia and Yemen,” the 29-year-old explains. “They couldn’t afford to pay my way, so I just hoped that it would turn into a job.” The risk paid off: Osman was quickly promoted to an agent and started moonlighting as a casting director. His big break came in 2017, when he did the casting for the music video for Kendrick Lamar’s “Element,” and this year he started collaborating with eco-conscious German label GmbH.

Vogue: How would you like to see the industry improve when it comes to inclusivity?

Affa Osman: Publishing houses and brands often forget that they need to apply what they preach to themselves. It isn’t enough to have good intentions. Important issues such as featurism [prejudice towards individuals with certain features] and colorism need more airtime—the industry favors Black girls with Eurocentric features. BIPOC beauty ideals can’t be shaped around white feelings.

Have you ever experienced any resistance from a client when trying to diversify their casting and, if so, how did you make yourself heard?

Most BIPOC know the feeling of walking on eggshells around a white client. Being honest about your feelings and concerns goes a long way, and as a casting director, it’s my responsibility. But as a BIPOC, it’s a tiring process sometimes, so I don’t blame someone if they cut ties and move on from a client.

How much power do you think casting directors have in making the industry more representative?

Not all the power lies in the client’s, photographer’s, and stylist’s hands. It’s important for a casting director to find their voice and use it unapologetically. People might not like what they hear, but I’d rather have peace of mind than lots of money. Surround yourself with people who take your life experience and knowledge into account and don’t shy away from difficult conversations—you don’t have to be friends with everyone.

After moving to New York to pursue a career in acting, Gilleon Smith soon fell out of love with the business and took a job at a casting agency before setting up on her own. Known for her game-changing work for Chromat’s New York Fashion Week shows, now, through her new role as an agent at CAA Fashion—a division of the entertainment and sports agency Creative Artists Agency—Smith is working to hold the industry accountable for more ethical practices, namely diversity and inclusion of talent.

Vogue: Do you think the fashion industry has become more inclusive since you started working in it, and what still needs to be done?

Gilleon Smith: Tremendous strides have been made in redefining traditional beauty standards, and we are seeing more representation at New York Fashion Week. While I love that diversity is being advocated for and celebrated, we need to be careful about not falling into the trap of trends. Designers and creative teams have to have an authentic desire to evoke change.

You’ve been casting for Becca McCharen-Tran, Chromat’s founder, since 2012. What are your favorite memories of working together?

Becca and I have similar ideals in terms of casting. Executing the spring 2020 10th-anniversary show in September 2019 was a particularly memorable moment. We featured all the Chromat babes of the past; models who are now mothers walking with their children as well as new inspirational models. Working on a Chromat show is always a mixed bag of exhilaration and exhaustion—we pull talent from all walks of life, from all over the world, which is no easy task. Through my role at CAA, I’ll be advising on more business collaborations with the brand as well as the casting.

The late disability advocate and model Mama Cax lit up the Chromat runway on more than one occasion. What does her legacy look like to you?

Cax was the epitome of internal and external beauty and survival, and taught me so much about confidence and perseverance. She fought so much adversity with so much grace. I feel blessed and honored that I had the opportunity to know and work with her, and I carry her inspiration with me every day.

“I have always been interested in people; their particularities, attitudes, stories,” William Lhoest says of his entryway into the casting profession. After taking up a job as a model scout in his home country of Belgium, it wasn’t long before stylist Benoît Bèthume heard about Lhoest’s individualistic approach and recommended him to Paris-based designer Marine Serre. The 30-year-old has now been casting Serre’s shows for five seasons and also regularly works with S.R. STUDIO. LA. CA., Sterling Ruby’s fashion label.

William Lhoest: As an industry, we still aren’t representing society. There has been a huge improvement since the 1990s and 2000s—there’s more diversity in ethnicity, size, shape, age, gender—but it’s not enough. Instead of selling fashion on the consumer’s insecurities and pushing them to pursue an ideal they cannot achieve, everyone should be able to identify themselves on the runway.

How can the industry keep progressing, and what is the casting director’s role within that?

Everyone working in the industry is responsible for changing it: Agencies need more diverse profiles, casting directors need to be more inclusive in their decisions, designers should adapt the clothes to the model, not the model to the clothes. The objectification of models is a big problem—every season, casting directors ask agencies for new faces who haven’t been seen before and are often not seen again. It’s human consumption, and noticing that is a good step. The next is action.

Marine Serre is known for the diverse casting of her shows as much as her sustainability credentials. What’s your working process with her?

When I started working with Marine, she already had people—friends, employees, and models—who she wanted to include in the casting. I composed everything around those personalities, bringing in models such as Amalia Vairelli and Adina Fohlin, and musician Kim Peers. Each season has its own narrative so there are new additions too; for spring 2021, Dutch-Iranian singer Sevdaliza narrated the collection film Amor Fati. We do the casting before the clothes are produced—they’re not based on a single size. One season we had a woman who was more than 184cm [6-feet] tall and another less than 164cm [5-foot-4] walking in the same show.

New York–based Katherine Mateo grew with the label Pyer Moss from its beginnings in 2013 and remembers its small team having to wear many hats. One day, she says, the brand’s founder Kerby Jean-Raymond “threw me a casting hat and I caught it.” The 28-year-old went on to work for casting director Michelle Lee, and Mateo now counts Aliétte and Tia Adeola among her clients.

Vogue: When it comes to inclusive casting, has the fashion industry changed for the better in the years you’ve been working in it?

Katherine Mateo: We live in a time where brands no longer lead people, people lead brands. Millennials and Gen Z are continuously pushing against society’s monotone ideas of race, body, gender, age, and sexuality. If we don’t see ourselves in a brand’s story, we simply won’t give them our money. Gone are the days of token representation for diversity’s sake.

Where is the industry still falling short on the representation front?

With lazy, surface-level efforts—throwing a minority model in a lineup isn’t diversity, it’s tone-deaf and muzzles the cry for real representation. Brands need to think: Who’s telling the story? Who’s bringing it to life? They need to hire more people of color across their creative teams. My charge to our industry is to go hard or go home. Genuine change, both personally and corporately, happens from the inside out.

You’re a longtime collaborator of Pyer Moss. What do you enjoy about working with Jean-Raymond?

Kerby is more than a storyteller; he’s a messenger. His vision is always clear and the finished product informative. He’s unapologetic about celebrating people who often go unheard, unseen, and unrepresented. I identify with that message. The challenge has been to get people to listen, so disruption grew as part of our collaborative strategy. That’s why he’s so influential—he makes people listen.

Are there any memorable moments from your time working with Jean-Raymond?

The finale of the spring show, when the models approached the back of house chanting Kendrick Lamar’s lyrics, “We gon’ be alright.” It was a hilltop celebration; a collective declaration from people who’ve been silenced in an industry that wouldn’t make room for minorities—so we made room for ourselves.