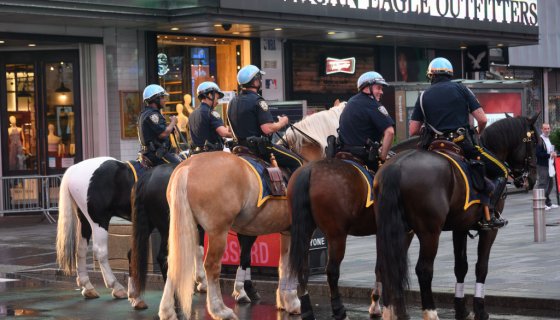 It’s beginning to look like the whole “To Protects and Serve” motto of police departments across America is more of a self-serving phrase for their egos than a proverb meant to reassure Americans of their tax-paying responsibilities.

A few weeks after 170 Atlanta police officers called in sick in response to their brothers in blue being charged in the , The New York Post is reporting that members of the NYPD have staged a similar “protest” in response to the anti-police brutality demonstrations that have taken place in the wake of the murder of George Floyd.

According to the report a whopping 272 uniformed police officers in New York City have filed for retirement from May 25th through June 24th compared to the 183 officers who filed their farewell papers during the same time period last year. The 49% uptick in retirements comes in the midst of protests calling for the defunding of the police across America and a looming $1 billion dollar budget cut to the NYPD. A source told the New York Post that the aforementioned retirements could signal a “crisis” for the 36,000-member police force in the Big Apple.

“We are worried about a surge in attrition reducing our headcount beyond what we can sustain without new recruits, and are afraid the City Council has not taken the surge into account,” he said.

Police Benevolent Association president Patrick Lynch said cops are “at their breaking point, whether they have 20 years on the job or only two. We are all asking the same question: ‘How can we keep doing our job in this environment?’ And that is exactly what the anti-cop crowd wants. If we have no cops because no one wants to be a cop, they will have achieved their ultimate goal.”

While people don’t want to abolish the police force entirely, we would like to see resources go to other programs that could help citizens with real world problems such as social workers as opposed to relying on police officers respond to domestic problems they’re not equipped to handle with a gun and handcuffs. That’s the basis for the calls of defunding the police.

Still, President of the Sergeants Benevolent Association Ed Mullins says the recent outcry for police reform and defunding has contributed to the lowest police moral he’s seen in 38 years.

The fiery union leader added, “People have had enough and no longer feel it’s worth risking their personal well-being for a thankless position.”

“There is no leadership, no direction, no training for new policies,” he said. “Department brass is paralyzed (and) too afraid to uphold their sworn oath in fear of losing their jobs. Sadly, the people of this city will soon experience what New York City was like in the 1980s.”

He’s not entirely wrong. Ever since plainclothes anti-crime cops were pulled from the streets in NY in response to the George Floyd protests, shootings in New York have jumped dramatically in the following days resulting in dozens of victims who’ve refused to cooperate with authorities.

We seriously have to be better than this, y’all. We can’t demand change and show that we’re not ready to take on the responsibility of taking care of our own communities. Especially with police spitefully giving us what we’re demanding.