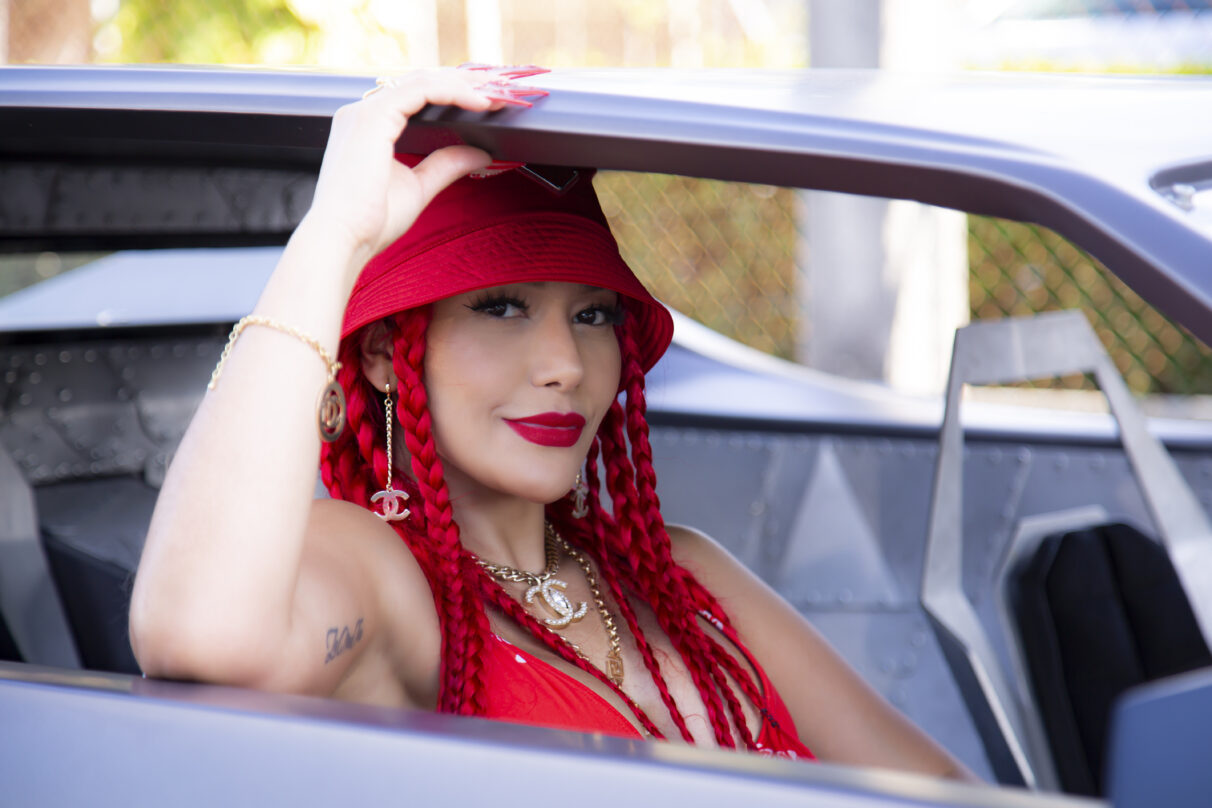 This is a weekly compilation of bite-sized song and EP reviews from our music writers. Discover new favs, read nuanced criticism of the week’s hottest releases, and more. This week, some of the featured artists include Farina, Brytiago, and Nino Augustine. Follow our playlist featuring these tracks and more on Spotify or Apple Music.

Last year, Colombian rapper Farina teased the masses with a brief caption on an Instagram post that simply read “Soy adicta al Perreo,” a line that would later resurface and eventually become part of the driving hook in her new single, “Adicta al Perreo.” The glistening and much-awaited release celebrates Colombia and Puerto Rico’s longstanding, mutual love for perreo and the reggaeton movement, drawing on some of the artist’s favorite tracks from the early 2000s era, like Edie Avila’s “Carolina” and “Felina” by Hector y Tito. With its entrancing beat and Farina’s dynamic, heavy-hitting one-liners, “Adicta al Perreo” is sure to become a staple at house parties and the soundtrack to plenty of steamy nights out at the club. – Nayeli Portillo

Let’s be real: Nino Augustine is having a moment. Following his excellent 2021 LP Global Ninz and a sultry duet with ChocQuibTown’s Goyo on “Sexy Body,” Augustine is back in the spotlight with a slow-grinding new afro-pop jam titled “Energía.” The track delves into the all-important matter of protecting your energy from haters and an unforgiving world, while also expanding Augustine’s roster of Colombian collaborators with a fiery feature from Cali’s Jossman and vibey music video directed by Jimmy Usma in Medellin. – Richard Villegas

Once you hit the play button on “No Puede Ser,” chances are you will be thrown straight to the past. The song’s flanging arpeggiated keys and airy vocals feel like the ‘80s from head to toe — a retro-vibe that has become increasingly common in today’s hits, The Weeknd can tell. The Venezuelan duo Mau y Ricky embraces this old-school, neon-flaring mood without bumps, as expected, so the surprise comes with Eladio Carrion. The reggaetonero has pulled out to bring a sweet singing to the song along with his slightly harsh lines. And everything blends in smoothly.  — Felipe Maia

Los Bitchos share a cumbia-inspired track that is reworked into their signature funk-fueled and psychedelic forward sounds as their third and final single ahead of their debut album out next month. Produced by Alex Krapranos of Franz Ferdinand, the eclectic international quartet creates kaleidoscopic, retro-futuristic sounds composed of guitar-leading melodies, energetic percussion, and synth supplementation. On the latest, member Agustina Ruiz seems to have lent her Latin American roots and musical library to bottle a few minutes of hypnotic, dance-worthy instrumental celebration. Inspired by the series Are You Afraid of The Dark? and Italian film director Dario Argento, the music video culminates the band’s trilogy storyline and sees their escape to a witness protection program type-scenario post-court-game room victory where they start their new beginning together in a quaint, alternate reality where things may still be lurking but they find time for joyous festivities despite. – Jeanette Diaz

With the release of her new track “Miami Beach,” it’s completely clear that Audri Nix understands the concept of “seizing the moment” to perfection. This is the Boricua singer/rapper introducing herself to all the eyes that turned her way after being photographed with Kanye West on New Year’s Day. But for all of us familiar with her, this is yet another great chapter in her list of smoky R&B-infused jams. – Cheky

Brytiago teams up with up ‘n’ comers Ankhal and Luar La L for “Sicaria,” a malianteo-tinged perreo dedicated to the ladies with an edge who aren’t afraid to get their hands dirty. Packed to the gills with their typical aggressive bombast and explicit bars that laugh in the face of censors, the streetwise track doesn’t bring anything new to the table, but for their respective fans, it’s enough to appease the thirst for new music. — Juan J. Arroyo

“Machina” may be part of the soundtrack of a horror movie, but the song might fit better on a Saturday night. Inspired by the italo-disco and Hi-NRG the duo listened to in Mexico City’s notorious Patrick Miller nightclub, Boy Harsher recruits Mariana Saldaña of L.A’s BOAN to provide bilingual disco diva vocals. Boy Harsher keeps the dark edges to their music but amp the camp factor significantly to reach dance music heaven. – Marcos Hassan

Austin-based singer and artist Kiko Villamizar has years of compelling, sonic storytelling under his belt, and his latest track demonstrates his aptitude for it. “Sembra el Maiz,” the third single from his forthcoming album Todo El Mundo, addresses the ever-unfolding climate crisis around the globe and the persistent political unrest seen over the last few years. The fluorescent, surf guitar groove-heavy single, interspersed with elements of cumbia and Colombian folk (Villamizar learned traditional folk music through his own family), also reminds us “to not give up planting seeds when things get hard…those seeds will bear fruit.” – Nayeli Portillo

Since its debut in 2018, Estación Sub_Trópico has stoked considerable buzz in the Dominican underground with futuristic collisions of Afro-Caribbean drumming traditions and ambitious electronic soundscapes. The latest single “Bomba E”’ takes all of the duo’s sonic and spiritual influences and blends them up into a soaring rumination of trance-inducing drum circles and psychedelic visions; providing a delicious first taste of their upcoming EP, Fieta y Mañana Gallo. – Richard Villegas

“Parti do Alto” is a wholehearted and bittersweet love song by Assucena Assucena, formerly known as the frontwoman of As Bahias. The group led a refreshing wave in Brazilian popular music over the last few years, bringing back the MPB poetic drive and grandiloquent lyrics to big stages. Assucena, now flying solo, doesn’t show any sign of losing such a sophisticated and intricate elan. Her wordplays about leaving — or being left — are highlighted by the broken tempo guitars of her first single. — Felipe Maia

In a world rapidly increasing its desire for NFT’s and the privatization of electronic assets, early pioneers of LA’s psychedelic cumbia-punk sound, Tropa Magica, are releasing an innovative video game to accompany their single “Meme City” off of their most recent album endeavor Tripiando Al Infinito. After being under development for a little over a year, the 8-bit styled video game is accessible, free, and now available for play via app download. Navigating levels as out of this world as their music sounds, the gameplay also infuses other single snippets of the album as you collect coins, avoid death traps, and ultimately find your way through a pixelated shroom trip. The band will also be releasing physical memorabilia for the game release in the form of customized Nintendo cartridges. – Jeanette Diaz

Heartbroken, lovesick, and holding a grudge, Arthur “The Royal Voice” goes on a tour of Los Angeles and its neighboring hills, deserts, and beaches in the video for his new single “SPAM.” Produced by duo Flamazz, the song is an R&B jam with dashes of rap and a bowlful of pettiness, as the Venezuelan artist gets all his feelings off his chest. The ubiquitous use of wide-open spaces for the visuals likely mirrors the song’s theme of abandonment breeding contempt in Arthur’s pained heart. — Juan J. Arroyo

High school is hell even for those of us who have long left the classroom, so a song like “Niños Furbitos y Niñas Lo Que Sea” is bound to make an impact for anyone with the scars to show. The Madrid quartet manages to combine bright twee pop melodies with righteous punk rage to brew an irresistible track that will get you good and angsty. Misfits past and present will have plenty to savor within Aiko El Grupo’s noisy chords. – Marcos Hassan