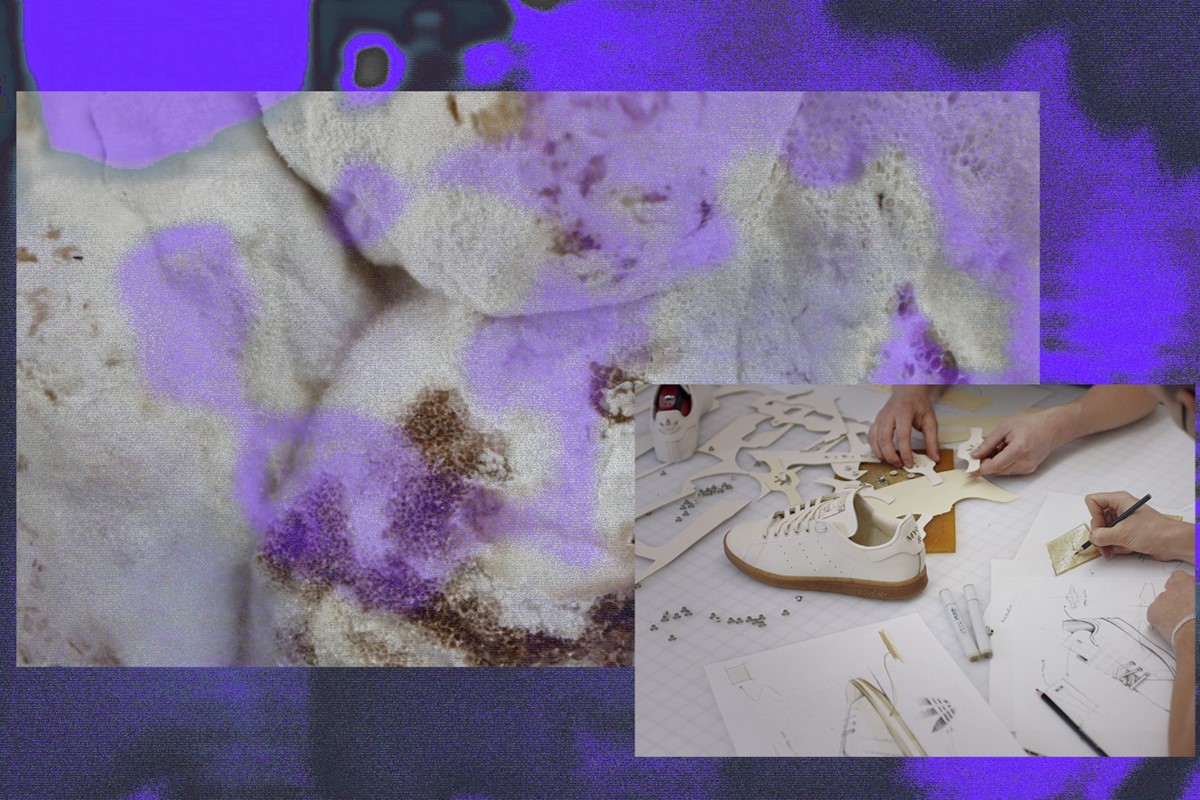 If you haven’t heard of Mylo yet, you soon will – we find out how the material is accelerating more sustainable fashion

Welcome to A Future World – Dazed’s network, community, and platform focusing on the intersection of science, technology and pop culture. Throughout April, we’re featuring conversations and mission statements from the people paving new pathways for our planet: activists, inventors, fashion pioneers, technologists, AI scientists, and global youth movements, alongside in-depth editorial exploring the new realities for our future world.

In partnership with adidas Originals

Mushrooms have exerted an influence over human culture for millennia, which makes it tricky to say that they’re “having a moment”.

Nonetheless, our fascination with them does seem to be reaching a particular pitch right now. From Alice in Wonderland to 1960s psychedelia to cutting-edge contemporary artists like Seana Gavin and Hamish Pearch, they have long served as an inspiration for art, music, design and literature. The influence of mushrooms also extends to the unlikely world of technology: apparently, the man who invented Bitcoin was a mycologist (that’s a mushroom enthusiast, for the uninitiated) and as a result, the currency’s structure mimics aspects of their structure. In 2019, Dazed reported that the beauty industry was “going hell-for-leather on the booming mushroom craze.”

Now, the humble mushroom looks to make a huge impact on yet another cultural sphere: the world of sneakers.

Adidas is about to release a new version of the classic Stan Smith with a twist: it’s upper is partially made from Mycelliumis. Known as Mylo, the material looks and feels like leather, and is created using the underground root structure of the fungi. It’s a versatile material, capable of taking on any colour, finish or emboss. Leather is still the best reference point – it’s similar in durability as well as how it feels – which is why it’s such a good fit for the Stan Smith, one of the most iconic leather sports shoes in adidas’s catalogue.

There are, of course, a plethora of synthetic leathers already on the market, so what’s different about this one? Well, Mylo has one key advantage. It’s entirely made from natural materials, using a highly efficient growth process that only takes two weeks. While the process is admittedly space-intensive, it doesn’t require any light and can be carried out just about anywhere. All of this means that it’s possible to create sneakers without using plastic, which is a big step towards adidas’s long term commitment to help end plastic waste. The Earth’s oceans are awash with plastic, something which causes significant harm to all manner of marine life, and the problem is only getting worse. Industries of all stripes figuring out a way to create plastic-free products is a badly-needed measure, and Mylo is a step in this direction.

The Stan Smith Mylo will be the first shoe ever with the upper partially made using Mylo but, at least as far as adidas is concerned, it hopefully won’t be the last. The material serves as just one part of the company’s wider drive towards natural or sustainable materials. This process is already underway: this year, 50% of the polyester used by adidas was recycled, and by 2024, virgin polyester will be 100% eradicated. Looking further ahead, the brand aims to have achieved global climate neutrality by 2050.

In order to meet such an ambitious goal, it’s important to shift production towards natural materials. A material like Mylo – which can regrow, be refabricated, and eventually be returned to nature – could play a big part in this, but the future could be even more sci-fi. Last December, a restaurant in Singapore made history by serving lab-grown “chicken” for the first time, which raises its own set of ethical questions: can a food product still be classed as “vegan” if it’s technically meat, but not made from an animal? Whatever the reason, there’s no reason why similar technology couldn’t one day be applied to create a genuine, sustainable leather. Given that, according to the UN, the livestock sector contributes to around 14% of all greenhouse emissions from human activity (although admittedly, most of this is for meat), initiatives like this – and Mylo  – could be an innovative way around the problems inherent in leather production.

Mushrooms are bizarre, even mysterious, things. Some scientists conceptualise them as something between humans and plants (don’t worry – they’re still vegan) and we share both DNA and a common ancestor with them. There has been some research done into the way that mushrooms can communicate with one another, in a process dubbed “the wood wide web”, and it seems as though we’re only just beginning to discover their true scientific potential. Now that we’re starting to figure out how to use them as an industrial material,  it will be fascinating to see just how far this can go – how big a part mushrooms might eventually come to play in the movement towards sustainability, and the fight to end plastic waste.